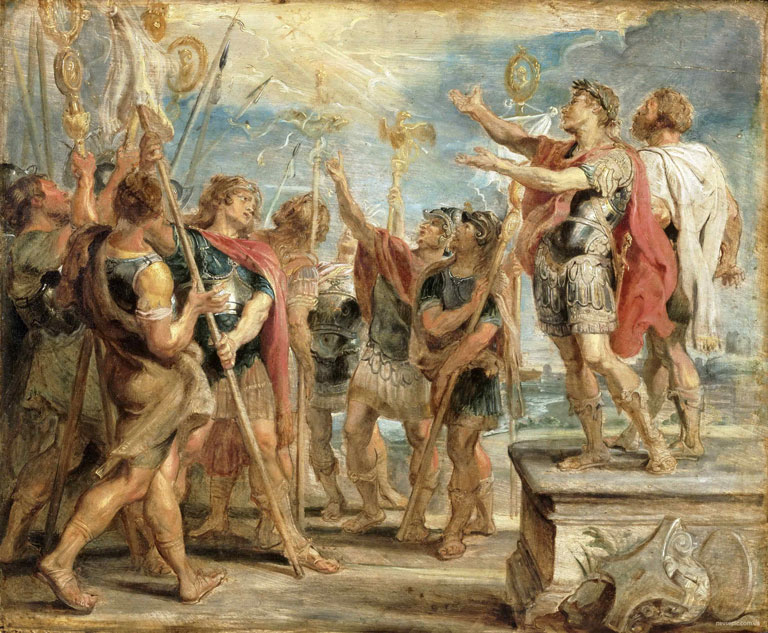 Last month we saw the fall of the Second Temple, prophesised by Jesus and Zechariah and Haggai before him.

Following the fall of the second temple, Hadrian, who had become Emperor in 117 AD, built a Roman Colony, Aelia Capitolina, centred around Jerusalem and banned Jews from the city.  Some of the rubble from the temple was used to build the Damascus Gate in the wall of the Holy City.  Around 135 AD, in place of the destroyed temple, he erected a provincial temple to Jupiter Capitolinus and a statue of Aphrodite was erected on the stone upon which Jesus was crucified.

Around 193 AD, as the Roman Empire was becoming less concerned with the Jews in the city, and increasingly concerned with the threat posed by the spread of Christianity, a small group of practicing Jews were finally allowed to hold services in Jerusalem on the Mount of Olives on the Eastern edge of the Old City.  The peak, the middle of three that form a mountain ridge that runs just east of the walled city, saw religious ceremonies in the days of the Second Temple and hosted a pilgrimage after its destruction.

In 258 AD, away from Jerusalem in Rome, Emperor Valerian would persist the persecution of Christians.  He ordered the death of Pope Sixtus II and his seven deacons, including the archdeacon, Lawrence.  The Grand Council of Allied Masonic Degrees uses the Degree named for St Lawrence the Martyr to open and close every meeting of a Council, conduct all its administrative business, and elect and install a Master of a Council.

History took a turn, however, when less than 50 years later, in 306 AD, Emperor Constantine had a vision that inspired his religious awakening.  He converted to Christianity and Jerusalem was renamed the holiest place on Earth.  Constantine even banned all non-Christian services and began forming the church’s hierarchy.

Constantine was destined for the college of Emperors but following the death of his father, Flavius Constantius, he was hailed by the Legions in York as Augustus and became the Governor of Britain and Gaul.  After several successful battles across the Alps and Italy he eventually established himself as the lawful Emperor of both the East and West and transferred the capital of the empire from Rome to Byzantium, later to be named after him.

It is said that his conversion to Christianity began one evening after a long day’s march with his army.  He believed he saw a sign from heaven; a pillar of light in the form of a special cross and from that point on, a standard bearing a cross was ordered to be carried before him in the wars.  Several Christians in his army came forward and avowed their faith, following which Constantine directed that they should wear on their armour a red cross.  Having been successful in battle it is said that Constantine with the help of his chief bishop, Eusebius, opened a Conclave of the Knights of the Order of the Red Cross of Constantine, whose members became the bodyguard of their Sovereign.

This Christian Order comprises two parts. The first ceremony consists of the Candidate’s admission, obligation, and then the Installation as a Knight-Companion of the Red Cross of Constantine, in which the historical basis of the Order is also detailed.

In separate ceremonies the Knight-Companion builds on what he has already been taught and in the ceremony of the Knights of the Holy Sepulchre and St. John the Evangelist this knowledge is further expanded and the ultimate aims of Freemasonry are revealed.

Next month, we finish our adventure through the history of Jerusalem with the birth of Islam and its disruption by the First Crusade.