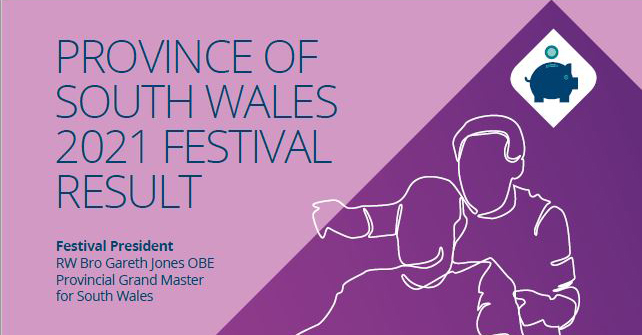 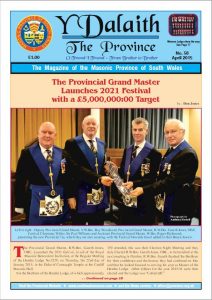 The Provincial Grand Master, R. W. Bro. Gareth Jones OBE, launched the Province of South Wales 2021 Festival in aid of the Royal Masonic Benevolent Institution (RMBI) at the meeting of Hendre Lodge No. 3250 on 22 January 2015, and was reported at the time in the Province’s magazine, Y Dalaith.

The aim of the Masonic Festival was to raise an ambitious £5 million in the 6 years to November 2021 for the RMBI Care Co. Ltd. The South Wales 2021 RMBI Festival exceeded this target, raising a grand total of £5,664,893.

The RMBI Care Co. Ltd provides residence, nursing care and residential dementia support to older Freemasons, their families, and people in the wider community. It’s been caring for older people for over 170 years, and today over 1,000 residents are supported across 18 care homes in England and Wales. The Albert Edward Prince of Wales Court in Porthcawl supports up to 76 residents with permanent care or short-stay respite.

The first masonic festival for the RMBI was held in 1851, and to this day there continues to be a cycle of festivals covering all the provinces under UGLE, so that at any given time 8 of UGLE’s 48 provinces will be in ‘festival mode’. The last festival for the Province of South Wales ended in 1999.

R. W. Bro. Sir Paul Williams, Chairman of the MCF and PGL South Wales 2021 RMBI Festival, said: “Since the 2015 Festival launch, the RMBI has been incorporated into the Masonic Charitable Foundation [MCF], which was incorporated in 2016. All of the funds raised for the 2021 Festival will be ringfenced by the MCF for charitable use by the RMBI”

A herculean effort was made by South Wales Freemasons and money was also raised by a record number of fund-raising events over the 6 years of the Festival. Such events included: Ladies days at the horse races, golf tournaments, businesspersons’ lunches, Provincial Grand Master summer balls and BBQs and a virtual auction to name but a few. The sale of Masonic merchandise also added to the total, as did a whole host of individuals’ fund-raising efforts.

The 2021 RMBI Festival culminated in a finale gala dinner at Cardiff City Football Club stadium on 19 November 2021, where the total raised was announced by Mr Mark Lloyd, the managing director of the RMBI Care Co. Ltd.

R. W. Bro. Sir Paul Williams said, “This was a phenomenal result notwithstanding the COVID-19 pandemic, which certainly negatively impacted the festival’s fund-raising campaign. The money raised will make a real difference keeping the residents and staff of the 18 RMBI Care Homes safe, well and confident of the future”. 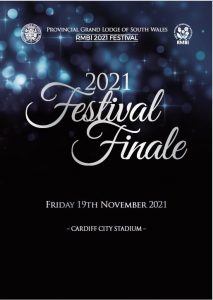 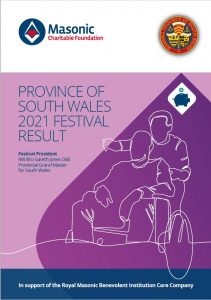 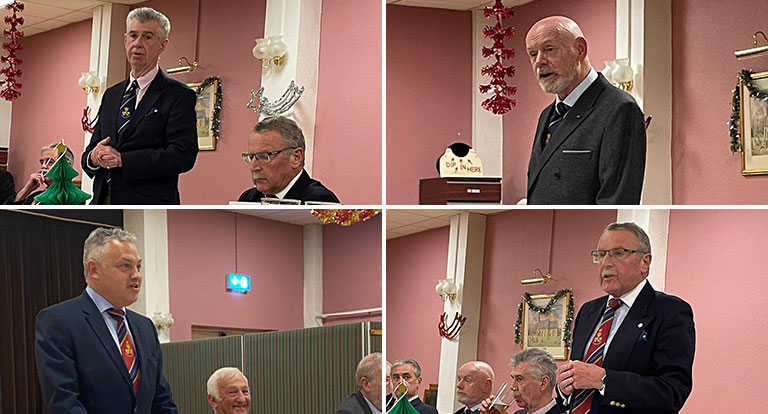 On the 19th of November, the South Wales 2021 Festival officially ended and the Charity Stewards Evening at Bridgend Masonic Hall on the 13th of December was a fitting occasion to recognise and thank all Charity Stewards, Area Chairs and Liaison officers for all their hard work and dedication. 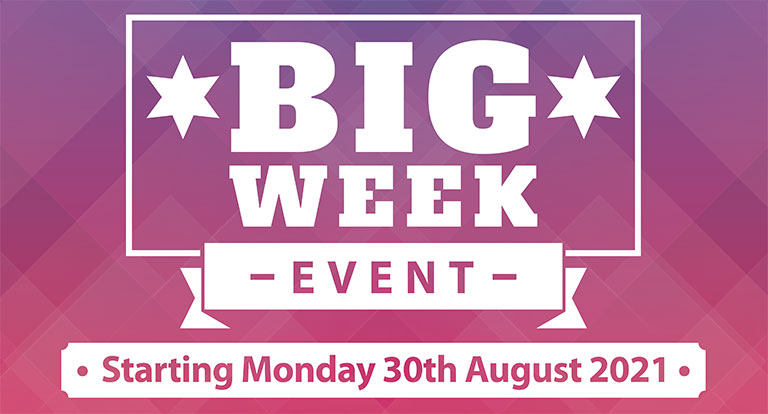 A reminder that the Big Week is an initiative inviting each Lodge and Brother in the Province of South Wales to participate in an event or activity in support of the RMBI 2021 Festival. The event started on the 30th August through to the 6th September 2021, with scope to hold such an activity either side of those dates.

There has already been a lot of support from several lodges, with events having already taken place and many organised during the dates allocated and beyond. A massive thank you to those lodges and brethren that have already contributed, either through an event or a donation.

Remember, if your lodge is unable to arrange an event/activity then a donation can be made to the festival by pledging an amount using the miscellaneous donation form. If you require any advice, please contact me on the below contact details please.

As of the 28th August 2021, here are some examples of events that have or will be going on in the province. Each lodge that has to date either contributed by an event or a donation should be proud of their efforts.

A full list of all those lodges that contributed will be circulated throughout the Province in late September and a letter of congratulations to each lodge will be forthcoming from the Chairman of the Festival, Right Worshipful Bro Sir Paul Williams.

Examples of has been achieved throughout the province to date:

The above are just some examples of what is being arranged/completed by some 50% of the Lodges in our Province. It is not to late for any lodge to participate or donate.

There is still time for all those lodges that have not yet pledged a donation to do so. By contributing any sum, using the miscellaneous donation form, will allow your Lodge to be added to the increasing list of those that have already proudly contributed.

It is a simple process to arrange or donate to the event. All donations can be forwarded to London via the miscellaneous payment form with cheque made out to the RMBI 2021 Festival South Wales. Alternatively, you can forward any donations to me, and I will carry out the necessary admin. My e-mail is philip.n.osborne@nullgmail.com 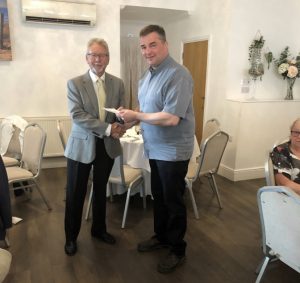 Once again, a huge thanks to all those who have already committed to the Big Week. Those thanks go to the Lodges that have made donations and those brethren that go the extra mile by carrying out or arranging an activity that has already raised thousands of pounds towards the grand total.

I am sure, that with the enthusiasm of the Lodge Masters and their brethren, there will be many more lodges that will soon be entered on the running log of contributors at the completion of the Big Week.

However, we are on the last lap of the festival. Please, if you have not already done so, support this initiative. A simple donation will make all the difference and an opportunity to be part of “something different”.

I will update you on our further progress in the next few weeks and should you require any assistance or advice, please contact me on the above contact details.

Dear Brethren, I greet you all well as we enter the final straight of the last lap.

Great news that we are now on zero Covid alert level from 7th August, and we can look forward resuming a full masonic programme of meetings this autumn.

Not being able to meet for the last 17 months has hampered our efforts to achieve our Festival Target of £5 million. I am so grateful to all the brethren who have maintained their commitment to the Festival through RPPs which have been the mainstay of our fundraising campaign. As always, I emphasise it not too late to take out an RPP and qualify for a Festival Jewel, a pledge of £500, can cost as little as £7.00 per month. It is easy to extend or renew your existing RPP online, or simply ask your Charity Steward and he can do the rest.

It is essential that we use every opportunity to make up for lost time as the festival deadline closes in just two months’ time this October. Indeed, my Events Committee were quick off the mark holding a very successful ‘businessman’s lunch ‘on 23rd July with ruby legend Graham Price.

The PGM’s Summer BBQ generously hosted by Akram Baig at Greenacres on 14th August was a great family day out and enjoyed by all. The ever-popular East West Ryder Golf will be held on 25th August with 24 teams competing.

The Big Week, led by Phil Osborne supported by his team, is building momentum. This will be a great opportunity for all lodges across the Province to make one last effort to help achieve our Festival target and make up for the time we have lost during lock down.

The response so far has been amazing, with over 60 lodges already signed up to holding a fund-raising event, including race nights, quizzes, wine tasting, Sunday lunches, sponsored bike rides, runs and car washes. This list goes on. Some lodges are donating in lieu of an event – the point being that all lodges should be able to something as part of our final push towards the target.  Brethren check the regular update on the Provincial Website and please make certain that your lodge is signed up for the Big Week. One of the last events will be the Hollywood Ball at the Star Inn, Troes.

The Festival Committee is now turning its attention to the planning for Final Festival Gala Evening to be held at Cardiff City Football Club Stadium on Friday, 19th November. This will be a great occasion to celebrate 6 years of enormous effort and commitment by the brethren of the Province on behalf of the RMBI. There will be a reception, dinner, followed by the announcement of the final festival total, entertainment by West End stars and Grand Finale. It will be a great occasion.  Tickets sales are already well underway, so please book early to avoid disappointment, particularly if lodges want to book their own tables of ten.

On a point of detail, result of the Festival will be announced that evening and will be recorded in the Festival Brochure. Collating Lodge totals is complex and takes time. Jeff Coles will need all lodges to have declared their final pledged totals by the first week of Oct. Promissory Forms will be issued to ensure that all outstanding donations can be included up until the end of Dec 2021. I will arrange for further details to be issued to help lodge charity stewards and treasurers complete this important task.

In the meantime, brethren please continue to support and enjoy the Festival as we approach the finishing line. 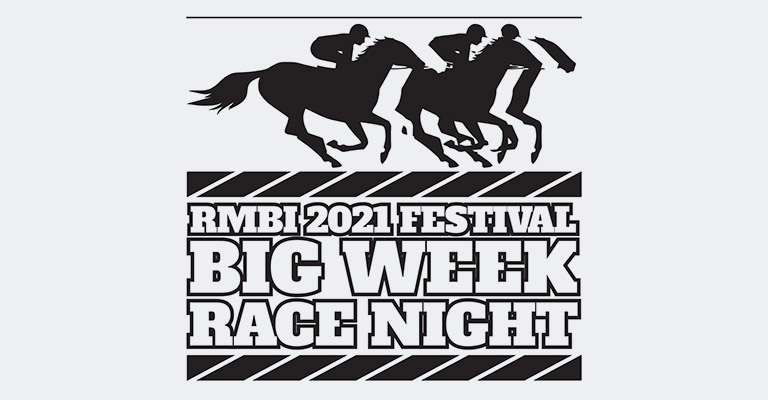 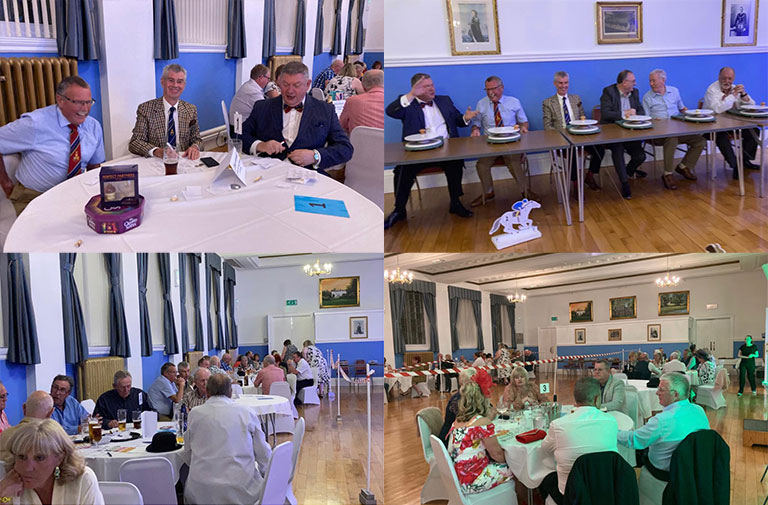 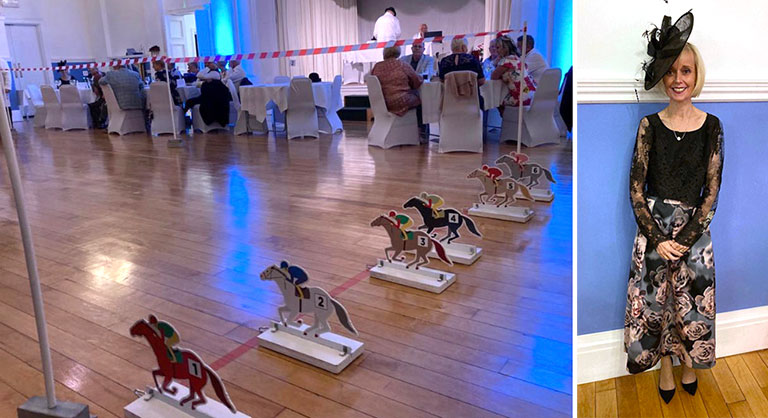 The event was organised by Race Stewards – Phillip Aubrey, Mark Newbold, Peter Williams and Peter Davies. Swansea Masonic Hall supported the event at no cost and the buffet was supplied by Mark Newbold. All present had a really enjoyable night and went home happy, some very happy with their winnings and raffle prizes. A good night was had by all.

It is still not to late to take part in BIG WEEK. If you have not already done so, please support this initiative. A simple donation will make all the difference and an opportunity to be part of “something different”. 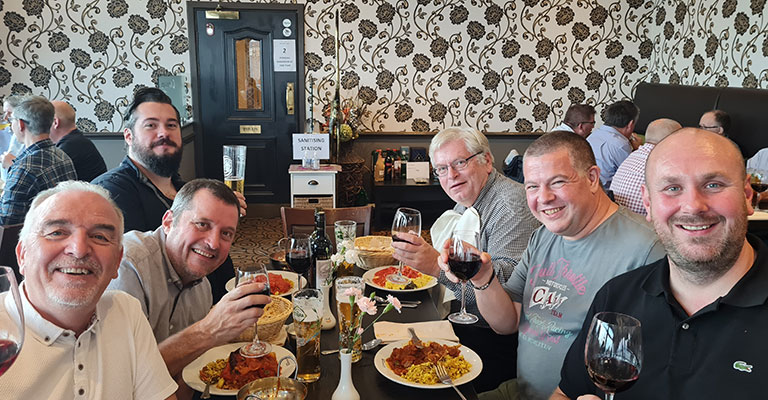 Baglan Lodge No. 6079 decided to hold its annual summer curry night event following the continued easing of government COVID-19 restrictions. The evening was held again this year at the Cinnamon Kitchen restaurant on the Aberavon beach front.

This was the fifth year that the ‘curry night’ had taken place, with almost £3,000 raised for local charities. This year 46 Brethren attended from all the Port Talbot Lodges and £750 was raised for the RMBI 2021 Festival ‘Big Week’.

W. Bro. Richard Evans, IPM of Baglan Lodge, said: “Again this year we had a really great evening with bonhomie, which we’ve missed during the pandemic. We were able to spend time together, have delicious meal, chat, laugh and raise funds for a worthy cause.

“Special thanks must go to those who donated raffle prizes, and to Ram and his team at the Cinnamon Kitchen for their continued support and generosity with the £100 donation to the final amount raised on the evening.

“From what originally started out as an excuse to have a little get together during the summer recess it’s grown from strength to strength with people already contacting me trying to book their seats for next year!” 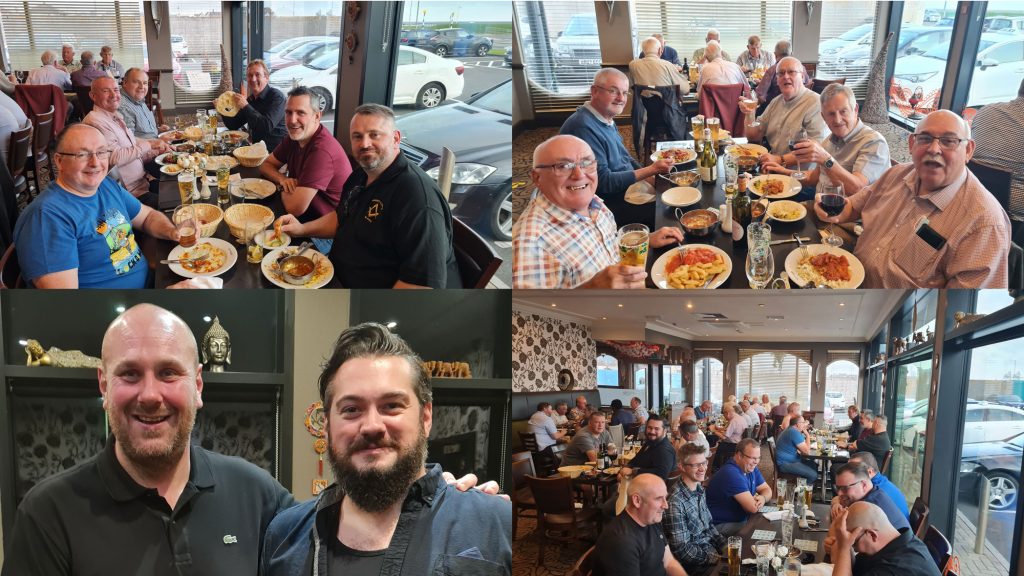 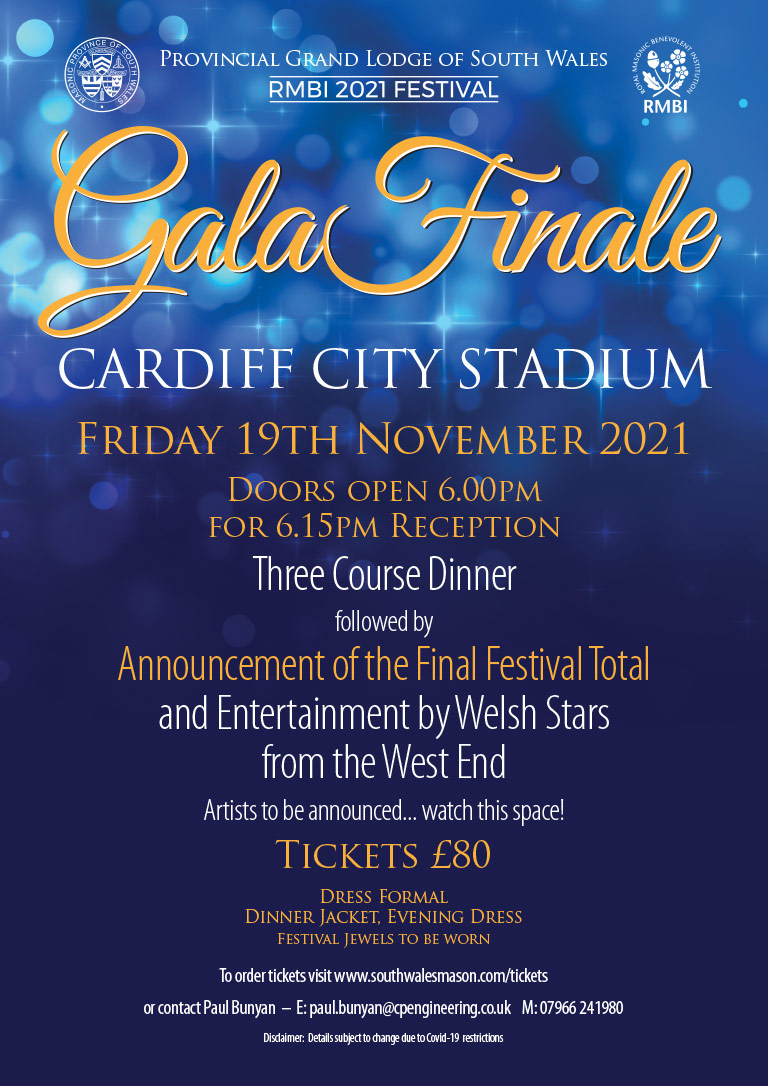 In this interview, Lionel talks about when he took office as Charity Steward, what he enjoys most about the role, and how he has promoted and encouraged giving to the RMBI 2021 Festival. 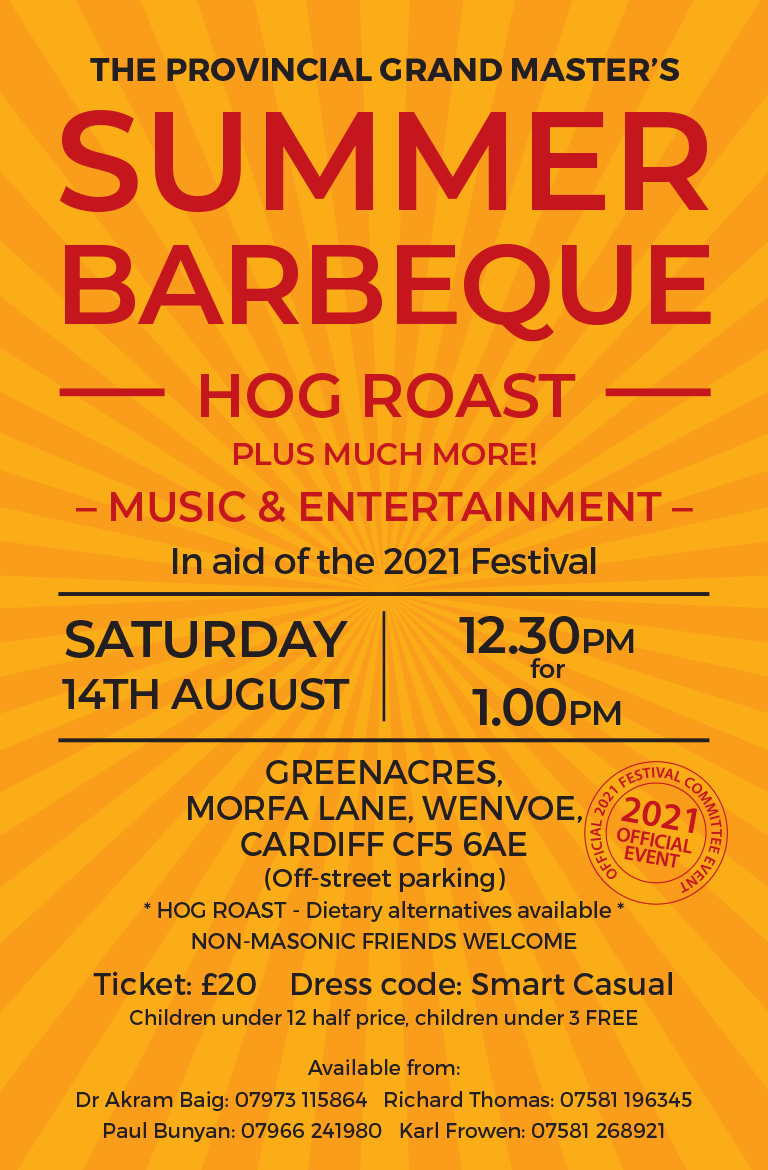