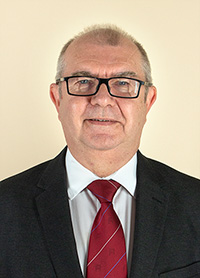 I was initiated as a Lewis into Preswylfa Lodge in 1982, attaining the chair in 1992 where I subsequently served as lodge treasurer for around 25 years. I was appointed to Provincial Grand Lodge in 1998 and subsequent promotions culminated in Past Provincial Junior Grand Warden in 2019 and Provincial Grand Treasurer in 2020.

In other Orders I was perfected into the Ancient and Accepted Rite in St David Chapter Rose Croix in 2003, took the chair in 2015, subsequently becoming Chapter treasurer and obtained my 30° in 2017. In the Order of Secret Monitor I was inducted into Delyn Conclave in 2007 (where I subsequently became the treasurer) in order to become a founder of Faithful Friendship Conclave later that same year, taking the chair in 2009 and subsequently becoming the conclave secretary. I was honoured to receive firstly Provincial rank and then Grand rank in this Order. I was a comparative latecomer to Mark masonry where I am currently Junior Warden in Mark Lodge of Progress.

I have been a proud member of Masonic Feed the Homeless for around 25 years and have spent much of that time as treasurer of the organisation.

Looking at the number of organisations of which I am treasurer it will come as no surprise that I am a Chartered Accountant by profession. I trained and qualified with a national firm of Chartered Accountants where I became a senior manager before moving over 30 years ago to take up a partnership with my present firm. I eventually became CEO of that firm, overseeing the acquisition of a number of other practices, and remained as such until I stepped down when I chose to work part time.

It gives me great satisfaction to be able to use my financial skills for the benefit of the Province and I look forward to the day when we can return to normality and all meet again without restriction.