Home » The Vault » A brief Explanation of the Royal Arch Jewel

The Royal Arch Jewel is arguably the most important of all Masonic Jewels. After Exaltation, which includes a brief description, for most Companions the matter ends there and the Jewel becomes just another piece of Masonic regalia which is a pity. By explaining the complex meaning and symbolism of the Jewel in simple terms we will achieve more knowledge and a better understanding. 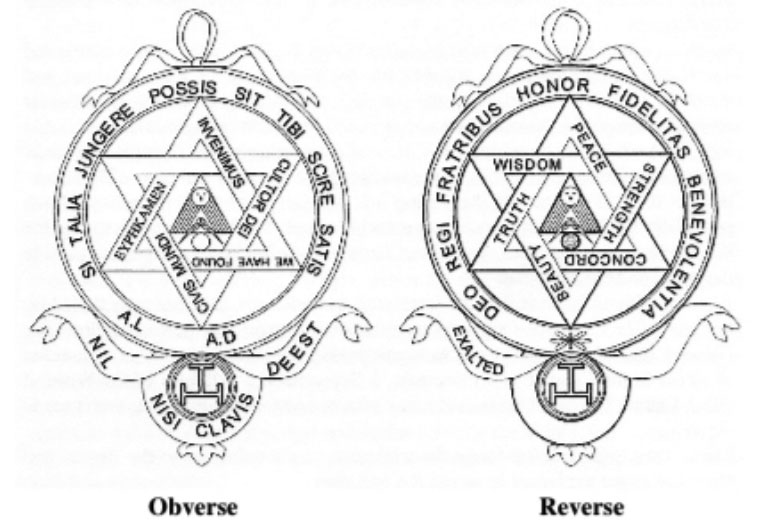 The Outline Shape of the Jewel

Let us start to examine the Jewel by looking at its basic shape.

It consists of two concentric circles, the outer one symbolising Eternity and the inner one the Deity. Inside the two circles are two interlaced equilateral triangles at whose centre is another triangle, with a background of rays, symbolising the Creator, and a pair of Compasses opened over the Globe, symbolising the Great Architect of the Universe.

The interlaced triangles remind us of our twofold spiritual and material nature. At the bottom of the Jewel is a scroll on which is depicted another circle with a Triple Tau inside it.

The Reverse of the Jewel

On the reverse of the Jewel, beneath the circle containing the Triple Tau, is a scroll with the word ‘Exalted’ engraved on it and spaces for the date of Exaltation and the name or number of the Chapter to be added.

Between the two concentric circles there is engraved a double Latin triad: ‘Deo, Regi, Fratribus’ and ‘Honor, Fidelitas, Benevolentia’. They are to be read conjointly, to produce the following translations: ‘Deo Honor’ (To God, Honour), ‘Regi Fidelitas’ (To the King, Fidelity) and ‘Fratribus Benevolentia’ (To the Brethren, Love).

The inspiration for these words is the ‘Regius Poem’, a cherished 14th century manuscript which is in the Grand Lodge’s Library. The poem is in English that has been translated into Latin for the Jewel.

The final inscription on the reverse of the Jewel is in the form of another double triad on the interlaced triangles: ‘Concord, Truth, Peace’ on one and ‘Wisdom, Strength, Beauty’ on the other. The meaning of the first is obvious as for the second, some claim it refers to the Wisdom of King Solomon, the Strength of Hiram, King of Tyre and the Beauty created by Hiram Abiff.

The Obverse (Front) of the Jewel

On the scroll are engraved the Latin words: ‘Nil nisi clavis deest’ (‘Nothing is wanting but the key’) and between the two concentric circles: ‘Si talia jungere possis sit tibe scire satis’ (‘If thou canst understand what follows thou knowest enough’). On the interlaced triangles there is again a double triad, but the triad on the second triangle is incomplete.
The triangle with its apex pointing upwards is the spiritual triangle having on its base the inscription: ‘We have found’ in English, repeated in Greek (‘Εχουμε βρει’) and Latin (‘Invenimus’) on the other sides of the triangle, the triangle with its apex pointing downwards is the material triangle: its base is blank and on one of the other sides is ‘Cultor Dei’ (‘Worshipper of God’) and on the other ‘Cives Mundi’ (‘Citizen of the World’).