Home » Orator's Blog » Whom have you there? 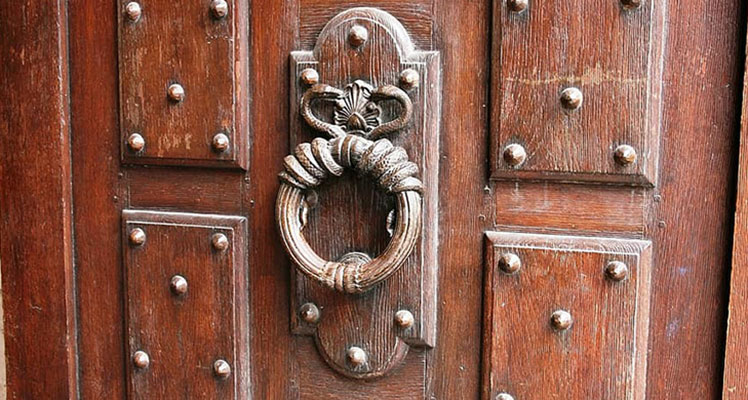 We continue our look around the Tyler’s room and examine some of the initiate’s first experiences from their perspective, with an explanation of the significance of the hoodwink and the door knocks.

Whilst the original meanings of some of our tradition and symbolism have over time become vague, others are clear and meaningful to a Freemason’s experience.  One of these is the use of the blindfold, or as we call it, the hoodwink.

The hoodwink goes over the candidate’s eyes to prevent him from seeing.  This serves two purposes, one practical and one symbolic, but each as relevant to us today as they were to our ancient brethren.

The practical purpose is probably obvious.  One of our abiding principles is that nobody is allowed to view a ceremony that they have not been through themselves.  This preserves the mystery and secrets attached to each of the ceremonies.

In the case of a candidate for initiation, he is hoodwinked so that, if he were to change his mind or somehow try to subvert the ceremony, he would not have seen the Lodge room or the brethren present.  But symbolically, the ceremony of initiation, in which the candidate is made a Freemason, suggests that at the end of it he is a different man.

He enters in darkness and, during the ceremony, discovers the light.

Knocking on the door

As Freemasonry doesn’t have one single point of origin, and has over centuries developed and appropriated practices from ancient guilds, fraternities and other societies, it is inevitable that there is not one singularly accepted set of ritual.

There are a set of overarching principles, and the general format of the ceremony is constant, but certain details might differ.  So, you won’t see exactly the same ceremony everywhere, thereby adding a rich texture to the experience of visiting other Lodges.

One such example is the entry into his Lodge of the candidate on his initiation.  The constant is that the door is closed and locked and either the Tyler or the candidate must knock to request admission.  The variation is how many knocks are given.  Sometimes it’s one, sometimes it’s three.  Either way, the point is that the Inner Guard can tell from the rhythm of those knocks that the person outside seeking admission is not a Freemason.

The Old and New Testaments feature the analogy of man knocking on a door, and the candidate, ignorant and in darkness, directly or via the Tyler, asks that the door be opened so that he can be admitted to knowledge and enlightenment.