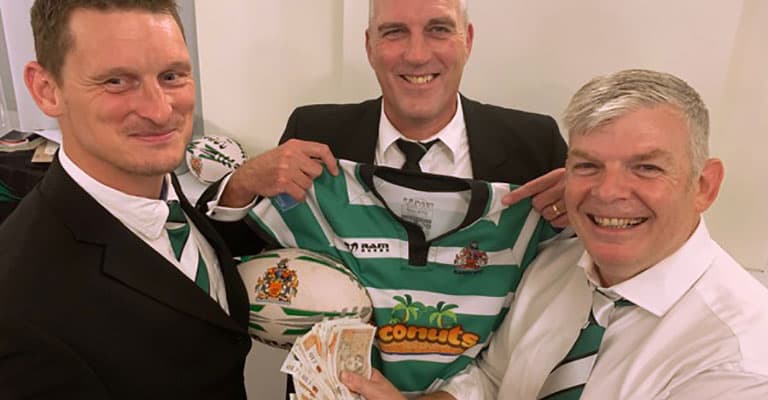 Barry RFC Mini & Junior rugby were the beneficiaries of a £1,000 donation from Welsh Rugby Clubs Lodge at a Rugby World Cup Warm Up evening social event at Penarth Masonic Hall.

Paul said, “Welsh Rugby Clubs Lodge is being established by rugby loving freemasons from across Wales to support grassroots mini rugby. Our motto is “Passing It Forward” to reflect that the club members aim to pass their love of the game to a new generation. We are delighted to support Barry RFC Mini & Juniors who do so much for young people in the community with a very well supported junior section.”

At the Welsh Rugby Clubs Lodge social evening, legendary BBC Scrum V presenter and comedian Phil Steele entertained a large enthusiastic rugby-loving audience with hilarious stories of triumphs and adversity on and off the pitch.

Phil Steele said, “I’m very humbled to receive this honour. Congratulations and best wishes to all at Welsh Rugby Clubs Lodge for the future in supporting Welsh mini rugby.”

An Outstanding Contribution to Grassroots Rugby award was presented to well-known former Barry school teacher and artist Jeff Giggs. The award was presented by Club Captain Paul Haley, who was first introduced to mini rugby by Jeff at Romilly Junior School, Barry in the 1970’s. Jeff coached many who went on to play first class rugby such as Steve and Chris Lakin, Matthew Newman, Ian Fifield and Darren Gibbon.

Paul thanked Jeff for the contribution he had made in introducing generations to rugby. Paul said, “We are very grateful to Jeff who has drawn our dragon logo for Welsh Rugby Clubs Lodge which has created a wonderful identity that encapsulates the spirit of the lodge.”