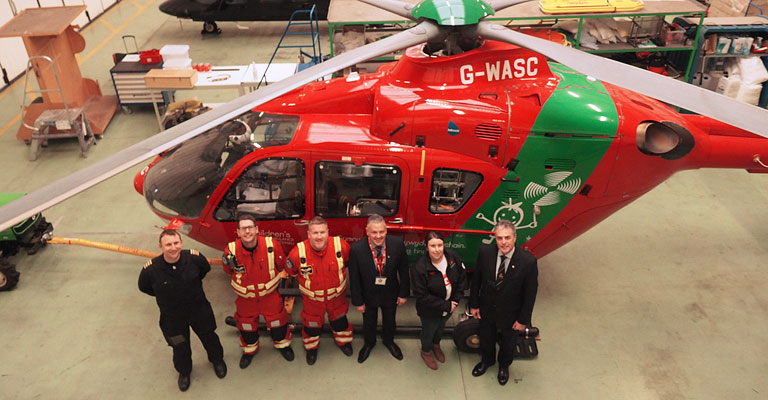 The South Wales Freemasons have given the Wales Air Ambulance Charity (WAAC) a further grant of £4,000. This was matched by the other three masonic provinces in Wales (Monmouthshire, West Wales and North Wales) to give a total donation, by Welsh freemasons to the charity, of £16,000. Welsh freemasons have been donating this amount to WAAC since 2007 to help keep this vital service running.

WAAC has four airbase operations, in Caernarfon, Llanelli, Welshpool and Cardiff, which saves lives throughout Wales. Crucially, teams can be there for anyone in Wales within 20 minutes.

Every year the charity’s four helicopters fly around 2,500 missions, covering rural countryside, bustling towns and cities. WAAC doesn’t simply fly patients to hospital, but the charity brings A&E directly to the casualty. It’s critical care consultants and practitioners have some of the most pioneering equipment and skills in the world, including blood products and techniques developed by the Armed Forces. This means that patients receive advanced care before they even reach the hospital.

Base pilot Captain Alan Petch said, “With each mission costing an average £1,500, we need to raise £6.5 million each year to run the service. We operate for twelve hours a day, 365-days a year. We are looking to extend this service to twenty-four hours a day, which will increase our running costs to around £8 million a year”.

He went on to say, “Wales Air Ambulance is funded by the people of Wales. We don’t receive any direct funding from the government, and we are not eligible for National Lottery grants. We rely entirely on the public’s support, through charitable giving, to help keep our helicopters in the air”.

Robert Payne of the South Wales Freemasons said, “Hopefully, the money from the Welsh freemasons will contribute to the fantastic work that Captain Petch and his colleagues do, and help the many people who need the help from this this vital service every year”.

Further information on the Wales Air Ambulance Charity can be found on its website:
https://www.walesairambulance.com/