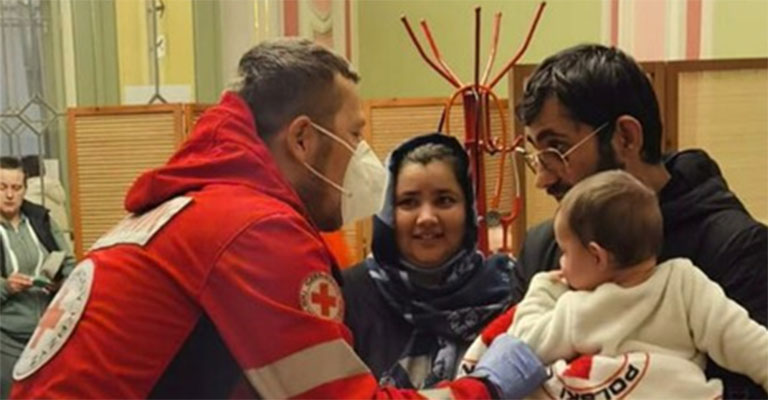 Thousands of Ukrainian refugees fleeing the Russian invasion of their country will be given food, warm clothing and a place to stay, thanks to a £50,000 grant to the British Red Cross from South Wales Freemasons and other Provinces.

The Masonic Charitable Foundation (MCF, the Freemasons’ Charity) and the United Grand Lodge of England (UGLE) have been monitoring the growing refugee crisis of over a million Ukrainian people who have been forced from their country and hundreds of thousands more who have been internally displaced from their homes.

As the situation in Ukraine deteriorates, trains leaving major cities like Kyiv for the border are packed. Huge queues are growing at border crossing points with reports of many families waiting days in freezing temperatures to reach neighbouring states. If the situation continues to worsen, the UN Refugee Agency has said it fears millions more people could end up seeking safety in other countries.

Already, Red Cross teams in neighbouring countries including Poland, Moldova, Slovakia and Romania, have been providing urgent support to these refugees. In Poland, where hundreds of thousands of Ukrainians have already sought safety, the Polish Red Cross has begun to establish temporary accommodation centres for new arrivals which can hold up to 400 people each. Similar responses have begun in Moldova, where in Chisinau, the Moldovan Red Cross has opened a shelter that can house up to 800 people, and in Slovakia, where the Slovak Red Cross has put up tents to house arrivals at the border crossing point in Ubla.

In addition to shelter, Red Cross teams are also providing food, hygiene items and warm clothing to those arriving. The Romanian Red Cross has deployed volunteers from branches along the border to distribute food, water, basic aid items and hygiene products to people in need. In Hungary, the Red Cross has 300 volunteers ready to help people crossing the border, many of whom have been preparing parcels containing bedding and hygiene items, and establishing information and first aid points.

The South Wales Freemasons contributed to the grant through the Masonic Charitable Foundation, which is funded by Freemasons, their families and friends, from across England and Wales.

Luke Tredget, Head of Emergencies, Surge and Technical Advisory from the Red Cross, said: “We’re very grateful to the Freemasons for this generous grant which makes a major contribution to the Red Cross relief effort for Ukrainian refugees.

“Most of those fleeing the fighting are women and children who have been queueing on the border in sub-zero temperatures for as long as 60 hours. They’re in urgent need of support and the Red Cross has teams on the ground doing everything possible to help.”

Gerald Rowbottom from the South Wales Freemasons, said: “I’m very pleased we’ve been able to help the British Red Cross in their relief effort for the hundreds of thousands of refugees running from the Russian invasion of Ukraine. These poor people are cold, hungry and utterly exhausted and I’m proud that Freemasons are able to assist in providing the support they need.”

Many Freemasons have contacted the MCF and UGLE to ask how they can offer further support in addition to this grant. It has therefore been decided to establish a dedicated Ukraine Crisis fundraising appeal to allow Freemasons, their families and friends to donate.

Anyone wishing to support Ukraine can donate via the Relief Chest online appeal page at www.mcf.org.uk/ukraine.

For over 150 years, the British Red Cross has helped people in crisis, whoever and wherever they are. We are part of a global voluntary network, responding to conflicts, natural disasters and individual emergencies. We enable vulnerable people in the UK and abroad to prepare for and withstand emergencies in their own communities. And when the crisis is over, we help them recover and move on with their lives. For more information on the British Red Cross please visit www.redcross.org.uk

About the Masonic Charitable Foundation

The Masonic Charitable Foundation (MCF) is one of the largest grant-making charities in the country. Funded entirely through the generosity of Freemasons and their families, the MCF awards millions of pounds each year to local and national charities that help vulnerable people, advance medical research and provide opportunities for young people. The MCF also helps to fund vital services such as hospices and air ambulances and regularly contributes to worldwide appeals for disaster relief.  In total, MCF support helps to improve the lives of thousands of people every year in England, Wales and internationally. As well as providing grants to charities, the MCF supports Freemasons and their families with a financial, health or family need. Visit www.mcf.org.uk