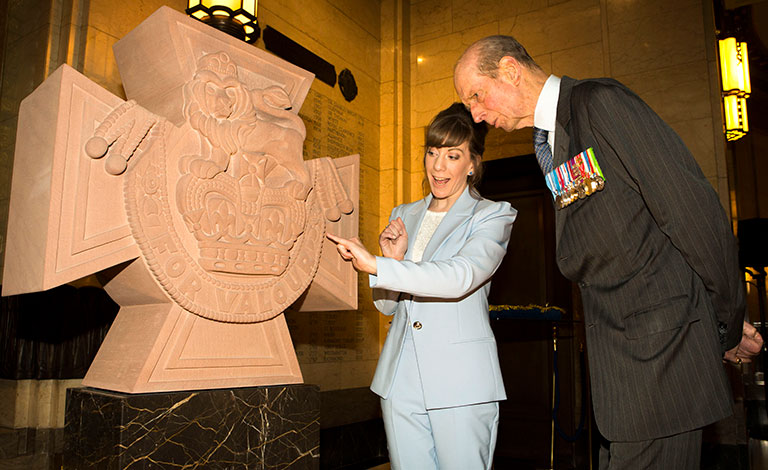 UGLE’s Grand Master, HRH The Duke of Kent, alongside Emily Draper who carved the Remembrance Stone

The Remembrance Stone was commissioned in 2016 by Granville Angell to commemorate all English Freemasons who were awarded the Victoria Cross. The VC is the highest award for gallantry that can be conferred on a member of the British Armed Forces and since its introduction in 1856, more than 200 Freemasons have been awarded the Victoria Cross – making up an astonishing 14% of all recipients.

The Remembrance Stone was carved by Emily Draper, who was Worcester Cathedral’s first female Stonemason apprentice, having been sponsored by local Freemasons. During the preparation stage of the stone, Emily also found out that her Great Uncle was a Freemason VC recipient.

The event was opened by Dr David Staples, UGLE’s Chief Executive and Grand Secretary, followed by readings from Robert Vaughan, Provincial Grand Master of Worcestershire (My Boy Jack by Rudyard Kipling) and Brigadier Peter Sharpe, President of the Circuit of Service Lodges (The Soldier by Rupert Chawner Brooke).

Over 130 guests were in attendance including serving military personnel, a group of Chelsea Pensioners and Sea Cadets, as well as Sergeant Johnson Beharry, who was awarded the Victoria Cross for saving the lives of his unit – Princess of Wales’s Royal Regiment – while serving in Iraq in 2004. Johnson is also a Freemason and a member of Queensman Lodge No. 2694 in London.

Music was provided by Jon Yates from the Royal Marines Association Concert Band, who performed the ‘Last Post’, a minute’s silence and the ‘Reveille’.

This was proceeded by the grand Unveiling and Dedication of the Remembrance Stone by The Duke of Kent, as a fitting tribute to the service and sacrifice of those Freemasons awarded the VC. The Duke of Kent also presented Emily with a stone carving toolset to aid her future projects.

The event was concluded with a speech by Brigadier Willie Shackell CBE, Past Grand Secretary of UGLE and Past President of the Masonic Samaritan Fund.

Dr David Staples, UGLE’s Chief Executive and Grand Secretary, said: “It’s been a huge honour to mark the dedication of this wonderful Victoria Cross Remembrance Stone and another significant milestone in our longstanding history.

“It is even more remarkable in the context that 14% of all recipients of the Victoria Cross have been Freemasons and I can think of no more fitting home than for it to be placed here at Freemasons’ Hall – a memorial to the thousands of English Freemasons who lost their lives during the Great War.”