Home » Charity news » Thousands of young patients at Wales’ only children’s hospital will be supported by vital play service, thanks to Freemasons 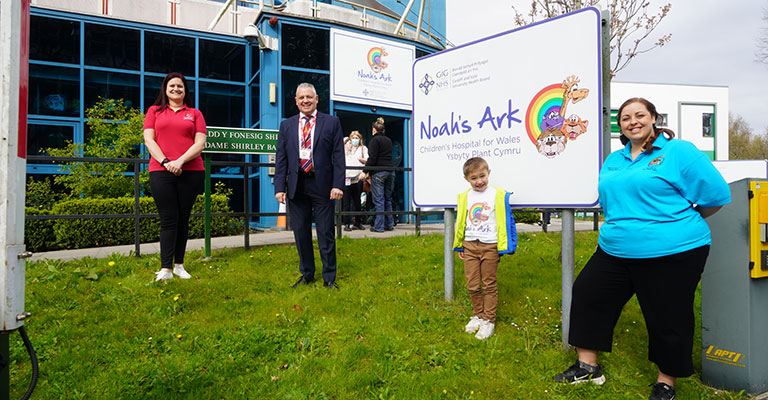 Thousands of young patients at the Noah’s Ark Children’s Hospital for Wales in Cardiff will continue to receive support from a vital play service seven days a week, thanks to a grant of £50,000 from South Wales Freemasons.

The play specialist team at Wales’ only children’s hospital supports around 3,700 children each month. Through structured and age appropriate play, they help prepare young patients for treatment, reduce anxiety, tackle phobias and support rehabilitation. They also work with younger children to ensure that they continue to reach developmental milestones – particularly important during long hospital stays.

Holly San Miguel’s son Isaac was born with a hole in his heart. He spent a month in the hospital before undergoing a successful operation. He returns every year for a full check-up.

Holly said:  “Having a child in hospital is bad enough but knowing that they can’t play or enjoy the things they should be, especially at such vital developmental stages, makes it particularly tough as a parent.  When Isaac was in hospital he was hooked up to machines which meant he wasn’t able to go to the playroom. So having a play specialist at hand to interact and bring things to him was really important.  It made the experience far more pleasurable for him but also helped me to relax by seeing him happy.”

The grant, awarded to the Noah’s Ark Children’s Hospital Charity by South Wales Freemasons, comes through the Masonic Charitable Foundation. The foundation is funded by Freemasons, their families and friends, from across England and Wales.

Director of the Noah’s Ark Children’s Hospital Charity, Suzanne Mainwaring, said: “We’re very grateful to South Wales Freemasons for their generous grant. Children admitted to hospital are often at their most vulnerable, not only because they are unwell but also as many feel understandably anxious about the procedures they will encounter. Being in hospital also means being separated from family, friends and familiar surroundings at a time when you need those things the most. During the pandemic, the play rooms and garden have been closed and ward access is extremely limited meaning no visits from siblings and a one parent policy. The support provided by the play team, to both children and their families, is always vital, but right now play, in all its forms, is more important than ever before.”

Robert Payne from South Wales Freemasons, said: “I’m very pleased we’ve been able to support Noah’s Ark’s play service. Children admitted to hospital often face frightening and painful treatments while being separated from their families and homes. This is made worse by the COVID-19 restrictions which only allow one parent to visit. The play service provides comfort and entertainment, and is highly valued by medical staff and parents alike.”

For further information about the Noah’s Ark Charity, please contact the communications and engagement manager, Bethan Simmonds on 0776 9940591 or email Bethan@nullnoahsarkcharity.org

About the Masonic Charitable Foundation

The Masonic Charitable Foundation (MCF) is one of the largest grant-making charities in the country. Funded entirely through the generosity of Freemasons and their families, the MCF awards millions of pounds each year to local and national charities that help vulnerable people, advance medical research and provide opportunities for young people. The MCF also helps to fund vital services such as hospices and air ambulances and regularly contributes to worldwide appeals for disaster relief.  In total, MCF support helps to improve the lives of thousands of people every year in England, Wales and internationally. As well as providing grants to charities, the MCF supports Freemasons and their families with a financial, health or family need. Visit www.mcf.org.uk