Home » Orator's Blog » The end of the beginning 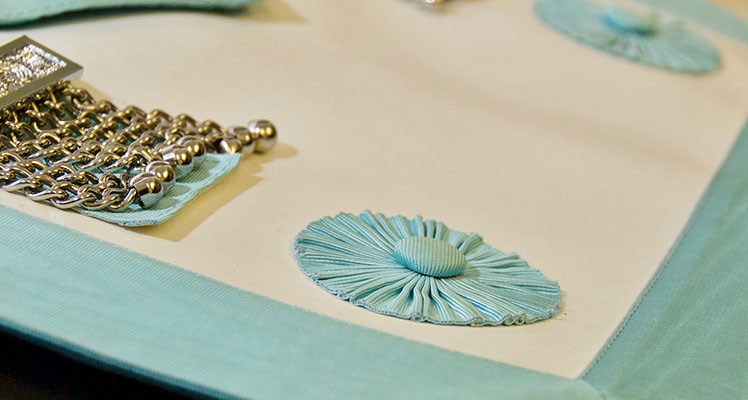 Having taken a look around the Tyler’s room in my previous two blog posts, we conclude our journey by examining some of the initiate’s first experiences from their perspective with an explanation of three key items with which they are presented during the ceremony.

One of the most recognisable items of a Freemason’s regalia is his apron.  If you asked any member of the public to describe a Freemason, you can be sure that they will know we wear aprons.  Generally, the apron alludes to our historic links to operative stonemasonry in the middle ages, when Stonemasons would have worn aprons to protect their clothes; and as ‘speculative’ or ‘free’ and ‘accepted’ masons, so do we.

There are many designs of apron, each signifying the progress the wearer has made in Freemasonry – either by denoting the particular degree he has attained, whether he has been installed as a Master, or been honoured with Provincial or Grand ranks or offices.

When you are first admitted into the lodge room on the night of your initiation, you are not yet a Freemason, and so will not have an apron.  At some point in the ceremony that changes, and you are invested with your first apron, and its significance, history and symbolism will be explained to you.  It is one of the most beautiful and memorable pieces of ritual in our ceremonies, and you will be left in no doubt as to the provenance and integrity of the fraternity you have just joined.

Every organised society needs rules for it to function effectively.  Prior to 1717, the rulers that oversaw ‘English’ Freemasonry relied on manuscripts or ‘charges’ that had been handed down over centuries and that described the general obligations and duties of a Freemason.  However, in that year, when four existing Lodges came together to form the Premier Grand Lodge of England, it was decided to codify these generally accepted principles into a more formal Book of Constitutions; and the first such edition was printed in 1723.

Every Province, Lodge and Freemason who subscribes to what is now the United Grand Lodge of England (UGLE) is bound to observe the Book of Constitutions, and it is designed to set out the general rules of the Craft and to instruct members on how to deal with nearly every circumstance and eventuality that may arise.  You will be given your own copy after your initiation so you too can have reference to those rules. But rest assured, should you have any questions about procedure or protocol, you can also ask your Mentor or Lodge Secretary who will know where to find the answer.

Just as the Book of Constitutions sets out the rules and regulations for UGLE, so each Province (or overseas District) and individual Lodge will have their bylaws.  You will be given a copy of each.  As you might expect, they set out additional rules and protocols to be observed more locally.  In the case of the Lodge bylaws these will include details such as when the Lodge meets, how certain decisions or ballots are made and the financial commitments (‘subscriptions’) each member is required to make.  They will also contain rules about how the bylaws can be changed if the brethren wish to do so for any reason.

The presentation of these last two items generally indicates the conclusion of the ceremony of initiation.  And they also conclude our exploration of the candidate’s first experience of Freemasonry through a walk around the Tyler’s room.  May we never forget how we felt when we took our first steps, so that we can ensure that the new blood that we now introduce to our beloved fraternity benefits from at least as much support, nurture and enlightenment from us and our lodges.  Only then can we be truly assured that our candidates are fully engaged in the Craft, and that its future is in good hands.