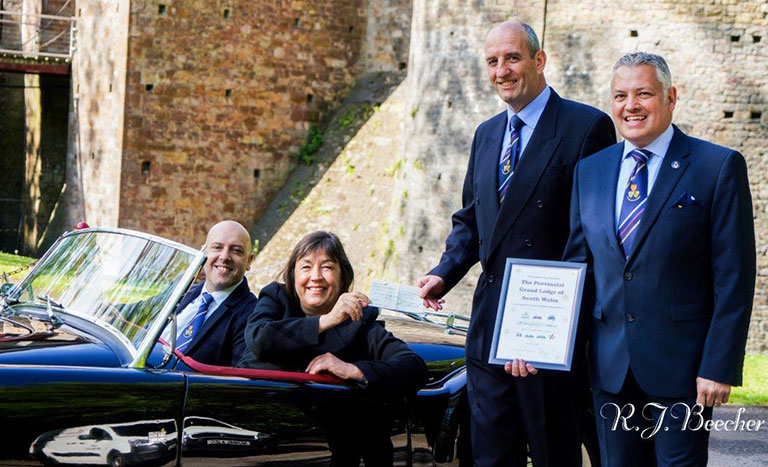 On Friday 10th May, Simone Enefer-Doy (Chief Executive of Lifelites Charity) and her team left their office in London to embark on this year’s challenge. Volunteers across the Provinces have been providing transport to get her around every county in England and Wales on an epic road trip to raise funds and awareness for their vital work providing life-changing technology to every children’s hospice across the British Isles. This year will include the Isle of Man, taking the challenge to a total of 48 landmarks in 15 days.

Marc Lewis APGM and Robert Payne, Charity Steward were delighted to welcome Simone and her relay team into South Wales on Monday 20th May. Marc presented a cheque on behalf of the Province of South Wales in support of “Lift for Lifelites II” and we wished them all well as they were transported onto the Province of Monmouthshire in a 1958 MG A, owned and recently restored by Spiro Ginis, Junior Warden of City of Cardiff Lodge No.7528

Lifelites began in 1999 as a Masonic millennium project, and although it is now an independently registered charity and well established in its own right, they still receive the support of Masonic Provinces across the British Isles.

Lifelites have been able to provide thousands of pounds of life-changing assistive technology to many projects to support life-limited and disabled children thanks to the generosity of the Freemasons.