Home » Charity news » Patients at a Swansea hospital given essential toiletries worth £6,000 by local Freemasons 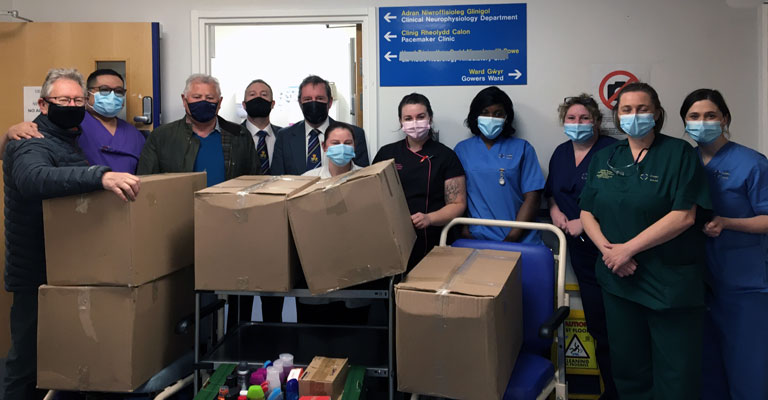 Swansea Freemasons have donated £6,000 worth of essential toiletries to Morriston Hospital, Swansea for patients who are in urgent need of them.

The Gower Ward of Morriston Hospital, Swansea, is a unit that specialises in the care of elderly patients who are suffering from various debilitating illnesses, including dementia. Many of these patients, when admitted, don’t have essentials such as soaps, toothpastes, hygiene products and other such toiletries. Frequently, they don’t have the financial means, or family support, to purchase them on admission to hospital, and recently the Gower Ward has been struggling to provide these basic items for such patients.

A junior nurse on the Gower Ward, Bro Mart Taylan, is a member of Singleton Lodge No 8399 in Swansea, and he requested assistance from the Lodge to purchase basic toiletries for the elderly patients cared for on the ward.

The request went to a group of Swansea Freemasons known as the Swansea Almoners, whose Chair, W. Bro. John Theo Davies, came up with an idea.

Bro. Phil Osbourne, secretary of the Swansea Almoners, said: “We thought that, rather than asking for financial donations to help the hospital, why not ask for donations of the actual items that the patient so desperately require. We put a box in the hallway of the Masonic Hall at Swansea and asked for brethren to drop off any unwanted soaps, shampoos, toothpaste, and other toiletries; anything that could make a difference to a patients’ stay at Gower Ward.

“The response from the Swansea brethren and local firms, such as Dr Organic Group Ltd, was amazing, with the value of the items donated being around £6,000.”.