Music Lodge No. 9919 held a charity luncheon and an afternoon of live music, at Cardiff Masonic Hall on Saturday 9 July, to raise funds for Velindre Cancer Centre. The event was organised by the Music Lodge’s Roger Duffy in memory of former Lodge member, Rob Hughes.

Velindre Cancer Care is a specialist cancer diagnostic and treatment centre located on the outskirts of Cardiff that has provided services to over 1.5 million people across southeast Wales and beyond. Each year it treats over 5,000 new referrals and around 50,000 outpatients.

Compèred by the fantastic Welsh National Opera singer, Gavin Davies, the concert – which followed the buffet luncheon – was an eclectic mix of music ranging from pop and rock, through Broadway musicals, to modern musical theatre, and performed by both amateur and professional musicians to a capacity audience of 100. 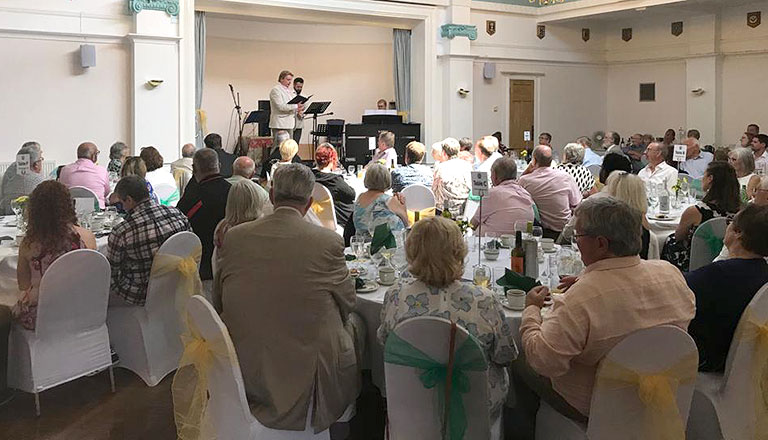 Roger Duffy on guitar and Clare Hughes (Rob Hughes’ widow and going under the stage name of Mrs Ianto Fullpelt) on bass guitar, opened the show with Bob Dylan’s To make you feel my love and the Beatles’ Til there was you. They later joined Mike Davison (guitar) for a further set.

Bass-baritone Gavin Davies then kicked off a musicals section with a number from Rodgers and Hammerstein’s Oklahoma! followed by tenor Lee Thomas’ beautiful rendition of Tell my father, from the short-lived 1997 Broadway musical, The Civil War, and the Tosti song, Ideale. Piano accompaniment for the singers was expertly provided by Robert Young. The Four Musketeers (Graham Anderson, Bob Free, Dave Bluett and John Manders, all of Proscenium Lodge No. 9059) provided highly entertaining performances of two numbers from Lerner and Loewe’s My Fair lady and Rodger and Hammerstein’s South Pacific. 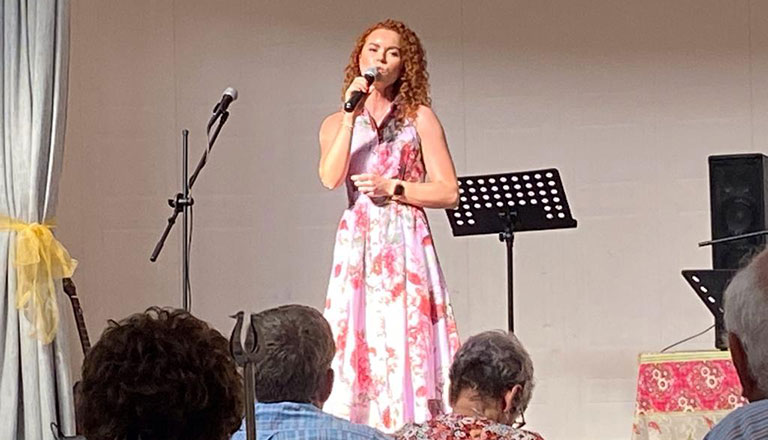 Pianist Aled Thomas gave his own highly-charged interpretations of Queen’s Bohemian Rhapsody and Scott Joplin’s ragtime, The Entertainer. Anthony Stuart Lloyd – from ITV’s Walk the Line and BBC’s The Voice, who has numerous West End credits to his name, and dubbed by the Telegraph newspaper as the man with the “Rolls Royce voice” – provided a medley of songs from his one-man tribute show to Howard Keel. Musical theatre and cruise liner singer, Holly Bluett, concluded the show with her captivating performance of If I love you, from Carousel. 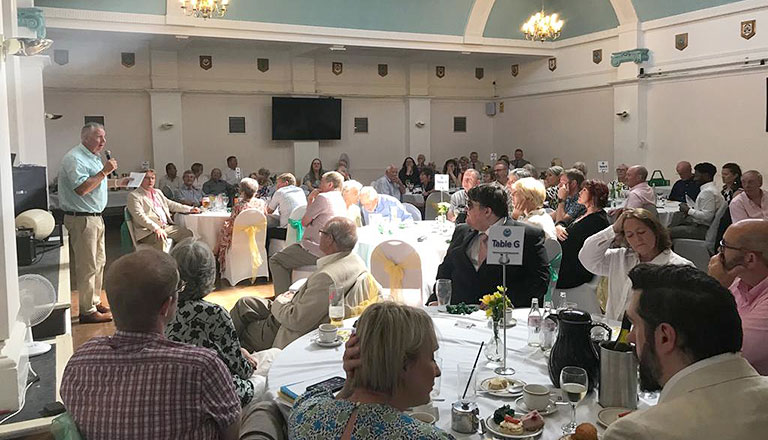 An interval raffle and auction of items generously donated by the brethren of Music Lodge – skilfully executed under the hammer of the Provincial Grand Charity Steward, Phil Saunders – together with ticket sales for the event, raised in excess of £2,500 for the charity. The Provincial Grand Master, D. Gerald Rowbottom, announced to the audience that the Provincial Grand Lodge of South Wales would fund-match, bringing the total raised on the day to more than £5,000.