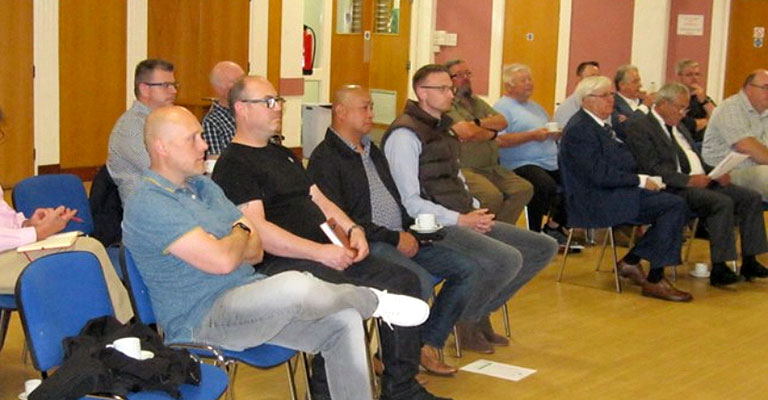 The strength of attendance at the resumption of the annual meetings of Provincial Grand Lodge and Provincial Grand Chapter on Saturday 25th June served to reinforce what I have been seeing around the Province for the last few months: Freemasonry in South Wales is back.

The same goes for the two meetings of United Grand Lodge I have been able to attend so far this year. The majority of us have put the pandemic behind us, but remain mindful of those who are more vulnerable and may not yet be able to enjoy the same freedom.

Before the pandemic, one of the key offerings of the Provincial Learning & Development team was the L&D Days, where brethren from across the Province could come together, benefit from talks and discussions, and learn more about certain aspects of the Craft and Royal Arch.

Saturday 18th June saw our first such event since the resumption of meetings – a morning event in Bridgend Masonic Hall entitled “The Origins of Freemasonry”.
It was a good test of the sentiment around the Province. Were our members ready for ‘extra-curricular’ masonic business? Would they feel comfortable meeting face to face on a Saturday to hopefully learn more about Freemasonry? The 20 brethren who attended were encouragement enough. Yes, there remains a section of our members who want to engage with our history, tradition and symbolism and learn more.
What was even more encouraging was that they were predominantly newer members. A straw poll indicated that roughly half had been initiated in the past year and the vast majority in the past five.
The agenda for the day was full and varied. After an initial welcome from me, we broke out into two groups to discuss our expectations of joining Freemasonry, and how those expectations had borne out since joining.

The feedback to the room afterwards was interesting. The two main drivers for the attendees joining Freemasonry appeared to be our charitable activities and an interest in the history and traditions of the fraternity. A significant proportion had a military background and was looking for the same camaraderie they enjoyed in the forces. Perceived benefits of membership included the opportunity to enjoy the company of brethren from a cross-section of society, as well as the encouragement for intellectual development.

The primary concern of the newer members appeared to be the pace at which brethren were expected to progress through their lodges and the quality of support available to them to enable them to enjoy that progression. The conversation led to the critical role of Mentors and Membership Officers in supporting our brethren, and the guidance and support set out in the UGLE Membership Pathway.
Reflecting the title of the seminar, I delivered a talk on “A Brief History of Freemasonry” taken from Solomon, which was warmly received. We were fortunate to have the company of Assistant Provincial Grand Master W.Bro. Christopher Davies, who then led an impromptu discussion on the origins and meaning of some of the modes of dress and other aspects of the initiation ceremony.

An opportunity for Questions & Answers followed and we heard more from W.Bro. Gary Downes about the Membership Pathway. The event ended with a reminder of the aims of the Learning & Development team and our need for feedback and engagement from members around the Province so we can tailor our services to meet their needs.

As such, each delegate has been invited via a follow-up email to give feedback on the event but chatting to them afterwards suggested they had greatly benefited from it and were keen to learn more and attend future events. For the first one back, I’ll take that!

My sincere thanks go to W.Bro. Colin Morgan for organising the logistics, W.Bro. Chris Davies for his support and participation, and W.Bro’s Mark Nicholls and Paul Deenik from the L&D team and Paul’s father Jan for their support and involvement on the day. I also thank W.Bro. Phil Aubrey and Bridgend Masonic Hall for very kindly hosting us and the supply of tea and coffee!
The next event will be on the morning of Saturday 1st October in Swansea Masonic Hall. Brethren and Companions interested in attending can email events.pldt@nullgmail.com, follow our social media or go to https://www.southwalesmason.com/learning-development-programme-of-events/ for details.