Home » News and Events » Kick off announced for Welsh Rugby Clubs Lodge No.9986 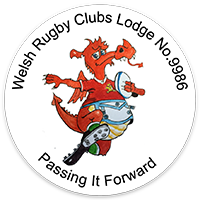 The Consecration of the Province of South Wales newest lodge, Welsh Rugby Clubs Lodge No.9986, will take place on Saturday 30th November 2019 at Cardiff Masonic Hall. “Match Programme” for the “fixture”, including “kick-off” time & how to book tickets, will be announced shortly.

The RWPGM Gareth Jones OBE approved the announcement to be made by the “Club Captain” Primus Worshipful Master designate Paul Haley at a World Cup Warm Up Evening at Penarth Masonic “Stadium”, which will be the new lodge “home ground”. The evening was attended by 110 diners, including Founders, prospective Joining Members & Candidates, in the company of Scrum V’s hilarious Welsh rugby pundit Phil Steele.

Paul Haley said, “We are very grateful to the PGM for all his support & encouragement and in particular for selecting the Consecration date which aptly coincides with the Wales v Barbarians fixture. Our home will be at Penarth Masonic Hall, which is built on the hallowed ground where Penarth RFC first began playing the Barbarians from 1890 to 1914”.

Further details will be announced on Welsh Rugby Clubs Lodge facebook page and all usual channels.