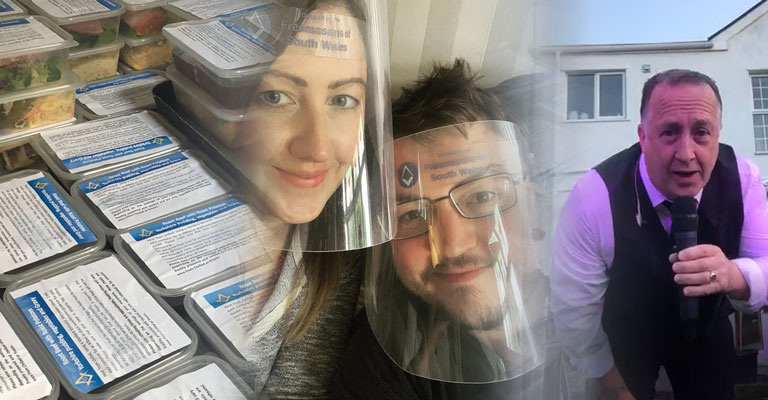 The 2020 COVID-19 pandemic has left no-one in the country unaffected. For some, the arrival of the novel coronavirus has merely been inconvenient, while for others it has been utterly devastating.

During this time, Freemasons around the whole country have rallied to help their local communities. This has been particularly true in the Province of South Wales, where Freemasons have supplied food to local communities, donated electronic tablets to local hospitals – so that patients could keep in touch with their families – and donated vital personal protection equipment (PPE) visors to protect key workers in over 100 local organisations.

Acts of friendship and charity

These actions by the Freemasons have highlighted the four guiding principles by which they operate – integrity, friendship, respect and charity. Kindness and charitable giving are deeply ingrained within the principles of Freemasonry, and each member is encouraged to make positive contributions to their communities and various causes. According to the United Grand Lodge of England, Freemasonry is one of the largest charitable givers in the country.

Each Masonic Lodge and Royal Arch Chapter within the Province of South Wales made contributions during the COVID-19 pandemic, with members of each giving their time and money. 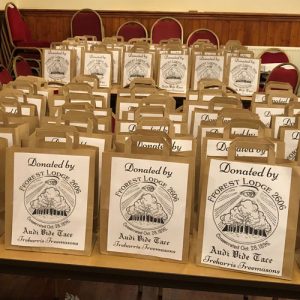 Fforest Lodge No. 2606 in Treharris donated PPE and food hampers, which were funded by online raffles amongst its members. Recipients included local key workers and care homes, the Albert Edward Prince of Wales Court home in Porthcawl, the Royal Glamorgan hospital and the Morel nursing home at Penarth.

The Lodge also coordinated the Fforest food hub, which provided food parcels every Friday to the vulnerable, those self-isolating and others in need within the community. From its inception in the middle to May to the middle of July, its members distributed over 700 food parcels within the local community.

Within Caerphilly borough, members of Princes Lodge No. 9306, Gelligaer Lodge No. 6298, Ystrad Mynach Lodge No. 8567 and Ancient Britons Lodge No. 9672 established the Cascade foodbank in Penpedairheol, Caerphilly, to support those in the local community who were in need of weekly food parcels. This initiative also received the support of local Member of the Senedd, Hefin David, who visited the foodbank to thank those Freemasons for the work that they were doing. 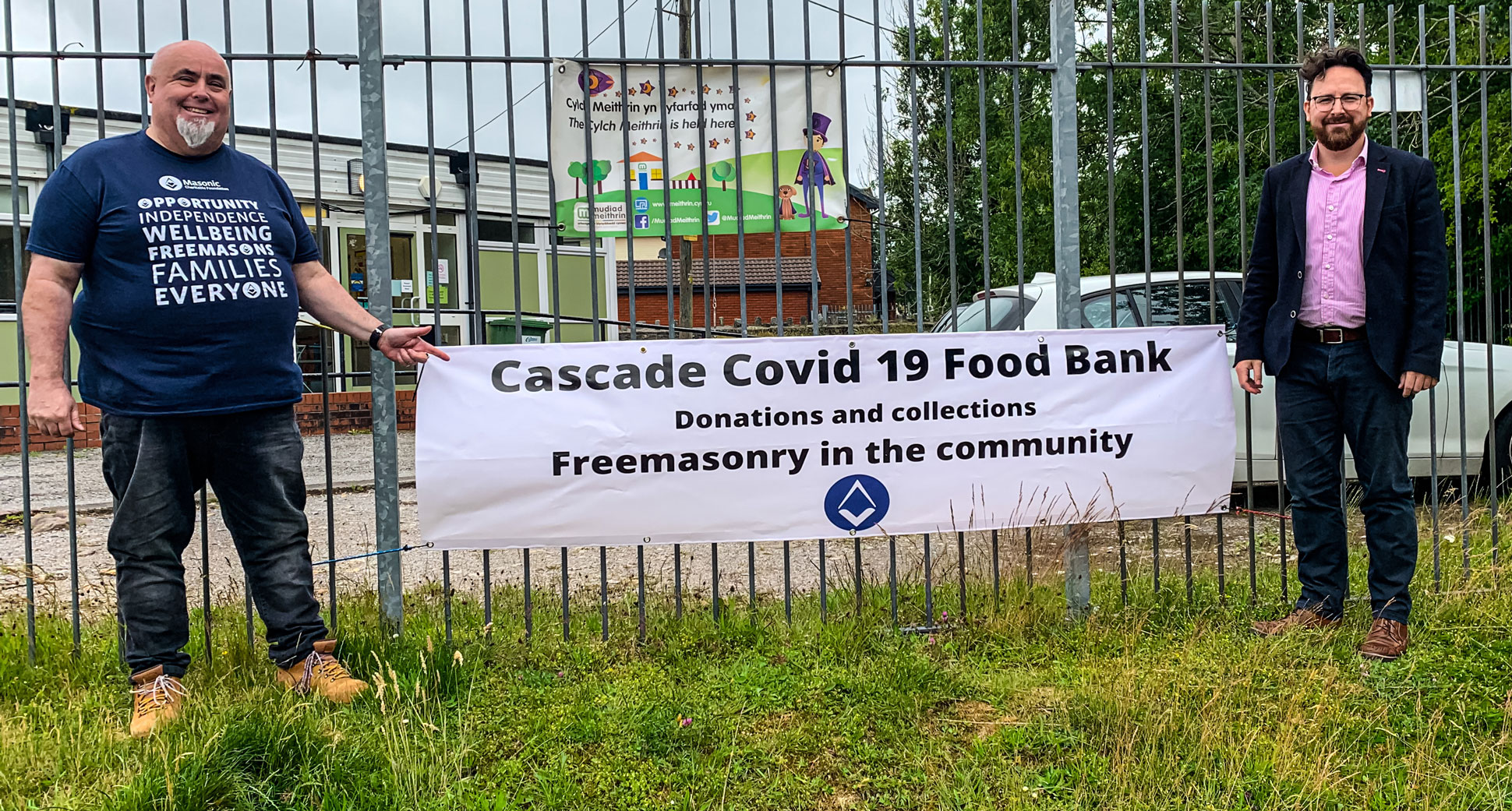 Many Lodges were also involved in the funding and donation of much-needed PPE to organisations and key workers who required it. 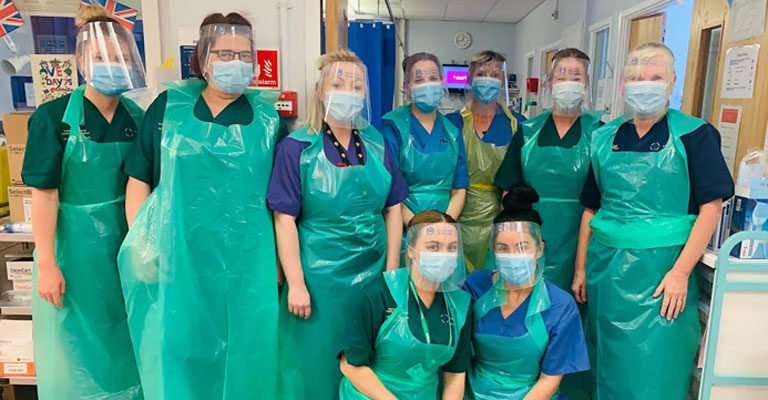 In many cases, it is the smaller and more personal acts of friendship and kindness that have had the greatest impact on individuals. 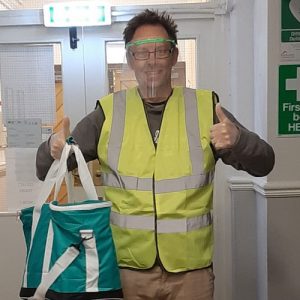 Members of Lodges in the Province volunteered as drivers to deliver meals to people, as part of the “Square Meals” initiative. In doing this they also struck up conversations with the recipients of the meals. This meant a lot to many, as they live on their own and had very little personal contact with others during the lockdown period.

Others did the shopping for the vulnerable and elderly, and ran errands to post offices and pharmacies.

During the pandemic, and more especially during the period of lockdown, keeping in touch with family and friends was more important than ever. Many people turned to electronic means by which to communicate, and the video conferencing platform, Zoom, rapidly rose out of obscurity to become a household name.

Many Lodges adopted Zoom to keep in touch with members, holding social events and quizzes: Talygarn Lodge No. 7216 even held a 60th birthday party for its Director of Ceremonies over the online platform. The Joint Executive even used it on numerous occasions to hold their meetings.

The mobile phone app, WhatsApp, also became increasingly important, with Lodges forming their own groups to keep in touch with each other.

However, electronic means of communication are not for everyone, and this was recognised by Paul Corcoran of Princes Lodge No. 9036. Paul, known around the Province for his fine musical skills on the organ, is also a telecommunications expert. He established a telephone conferencing system so that Lodge Almoners could set up conference phone calls with members.

Even the BBC struggled to maintain its usual schedules. Popular programmes, such as EastEnders and sports programmes, were cancelled because of the lockdown and social distancing rules that had been imposed. This meant that TV viewing increasingly featured repeats from yesteryear. Two Brethren decided to provide Saturday evening entertainment themselves, using Facebook Live as a platform from which to broadcast. 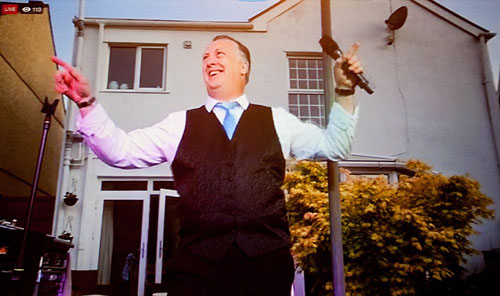 Stuart Ackery of Henry Pendrill Charles Lodge No. 3769, or better known by his alter ego, Deano Martini, entertained by giving open-air performances of “Rat Pack” songs from his back garden on Saturday nights. These can be found on Deano Martini’s Facebook page.

Mark Newbold of Adare Lodge No. 9247 (and current WM of the Lodge of Concord No. 8418) and his wife, Pauline, held quizzes with a difference – in fancy dress. These proved to be extremely popular, with Mark and Pauline raising over £1,200 for the NHS. Their quizzes can be seen on the YouTube channel “Marks crazy lockdown quizzes”.

All the fun of the fair

Last but not least, a special event on Barry Island is being arranged as a ‘thank you’ to the staff and families of the South Wales NHS and the care homes in the Vale of Glamorgan. Alan Barham of Sir Francis Drake Lodge No. 9008 and his friend Henry Danter (who as well as being the owner of Barry Island Pleasure Park would by now be a Lodge member were it not for the suspension of masonic business), have organised a special, celebrity-packed event at the popular seaside venue on 20 August, which wil be opend by Wales’ First Minister, Mark Drakeford. (Any enquiries to  barryfairthankyou@nullgmail.com)

Gareth Jones, Provincial Grand Master, summarised the actions of the Freemasons of South Wales, when he said “These are great examples of Freemasons doing what they do best; helping and supporting those in need. And not just, as some would believe, our own members, but the wider community. These extraordinary times call for special people to step forward and my members across South Wales are doing just that. From simple acts of kindness like collecting shopping or prescriptions to initiatives such as providing meals to the isolated and vulnerable, funding and distributing plastic visors for healthcare workers, and purchasing electronic tablets for patients to keep in touch with their loved ones. I am very proud to see Freemasonry living up to one of its basic principles, and doubly proud of my wonderful members who are turning those principles into practical action.”