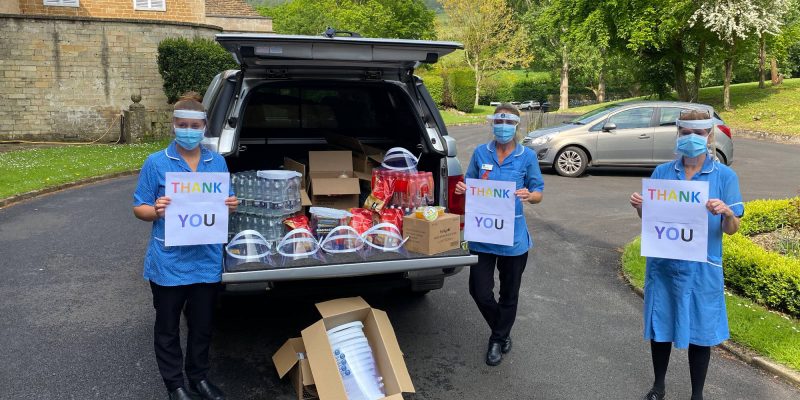 The United Grand Lodge of England (UGLE), the governing body for Freemasons, is inviting its 200,000 members to fly specially designed flags at 10am on 5 July, to celebrate this unique day dedicated to the NHS, social care and all those that work on the front line, who have saved so many lives during the pandemic. The celebration will also remember those workers we sadly lost.

As part of the event, the Teddies for Loving Care (TLC) scheme, managed by the Freemasons, produced a limited edition of TLC teddy nurse badges to be given to medical staff that use the bears in their day-to-day work. Some 48 provinces across England and Wales took part in the campaign and distributed them to NHS staff.

The Freemasons have been donating teddy bears to NHS accident and emergency units for 20 years. Almost 3.5 million teddies have been donated to hospitals, minor injuries clinics and other NHS services to comfort young children during times of distress. Many Freemasons also volunteer hundreds of hours each year to manage the scheme, deliver bears to hospitals, campaign to raise funds and increase awareness through events and talks.

The UGLE is one of the core supporters of NHS, Social Care and Frontline Workers’ Day, alongside the Cadet Forces, English Heritage and the Women’s Institute. A £5 donation from every flag and length of bunting made will be equally divided between NHS Charities Together and the National Care Association.

Freemasonry for Women and the Order of Women Freemasons have also joined the UGLE in this initiative, as Freemasons aim to set a record for the number of flags raised simultaneously across the nation.

Subsequently, at 11am, the UGLE headquarters in Great Queen Street will be raising the flag and a trumpeter will play the last post. At the same time, Freemasons are planning a moment’s silence to remember NHS workers and all those who died from Covid-19. The day continues with a toast to the NHS at 1pm. After this, they will be raising a cuppa to the NHS during afternoon tea at 4pm.

At 8pm, the Freemasons will join the nation in an evening clap for NHS workers, while church bells are set to ring 73 times to celebrate 73 years of the NHS. Closing the celebrations at 9pm, there will be a #timetotoast for all NHS workers.

So far, nearly 130 Lodges and Provinces have made a commitment to the raising of the flag and other elements of the day. In addition, Northumberland Freemason James Horner is hosting a special live-streaming theatre show from the Tyne Theatre & Opera House with a compère, comics, singers, readings, video footage and messages of support to raise money on the day.

Bruno Peek, pageant master to the Queen and creator of NHS, Social Care and Frontline Workers’ Day, said: “We are delighted that Freemasons, whose members come from all walks of life, are playing such a high-profile and active role to start this special day of celebration and commemoration of those within the NHS, social care and on the front line, who undertake so much for us all, 24 hours a day, seven days a week and 52 weeks a year, without any thought of their own safety.”

In addition, Dr David Staples, chief executive of the UGLE and a consultant in acute internal medicine at Peterborough Hospital, said: “We are facing the greatest global pandemic in living memory and the NHS has never been so tested in its history. Its staff have been stretched beyond comprehension during the last year and they deserve our gratitude, our applause and all the support we can give.

“We are encouraging not only our 200,000 members, but the entire population to celebrate the day honouring and remembering NHS workers with a complete programme of events on 5 July.”

Since the beginning of the Covid-19 pandemic, Freemasons have been supporting the NHS in many different ways. They have donated more than £2.5m so far to the Covid-19 effort and completed 18.5 million hours of volunteering to help those in need each year. The donation is being used to help with food, personal protective equipment, supplements for hospitals and hospices, funds for NHS workers and ambulances.

Freemasons have also offered their Lodges as bases to administer the vital vaccinations. In Hertfordshire, for example, Halsey Hall is being used as a vaccination centre, supporting three local GP surgeries. The centre has been operational since 15 January and once fully scaled up, there will be up to 1,000 vaccinations given there each day.

To find out more about NHS, Social Care and Frontline Workers’ Day and to register your participation in the event, please visit: www.nhsfrontlineday.org