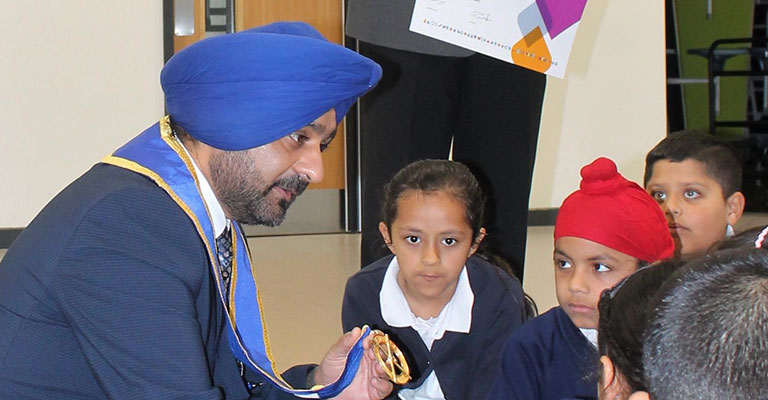 To help more than 1.4 million people experiencing mental health issues, Freemasons are donating more than £550,000 to help citizens across the UK.

To help the population exit the pandemic in a better state of mental health, the United Grand Lodge of England (UGLE), the governing body for Freemasonry in England and Wales, are supporting various institutions, schools and universities.

Among the institutions receiving support, the Freemasons are donating £125,000 to Young Minds to help them to support approximately 1.4 million young people. The goal is to increase Young Minds’ reach by 10% and help many more young people find the support they need, when they need it, and be able to take practical, actionable steps to improve their mental health.

The donation will enable the project to proactively recruit more young Black people and disabled people, to diversify Young Minds’ pool of bloggers to expand the experiences and voices on the website. The idea is to create more content on racism and mental health, as well as for those living with bipolar disorder.

The UGLE and the Masonic Charitable Foundation’s (MCF) – the Freemasons’ charity – donations will also help 100,000 children and young people across the UK to access information, support and guidance online.

In addition, the donation will help to develop and pilot the Suicide Safer Schools programme in three to five schools in west Cumbria, supporting 1,000 young people and 500 parents, teachers and staff, by raising awareness of suicide prevention, understanding help-seeking behaviour, and training selected staff in suicide intervention.

In a separate project, the Freemasons also aim to reach 800 young people in London, who will benefit from better understanding about the prevention of young suicide through volunteers running awareness-raising events in their local communities.

Elsewhere, 2,188 children and young people through three projects will be supported with mentoring and skills workshops. About 270 parents/staff will receive awareness workshops and support, while 270 young people will be trained as peer mentors.

The Freemasons’ donations will also support at least 600 teachers, professionals and parents, who will be provided with support through three projects offering mental health first aid training, learning events and parental support, and this will in turn will help 25,000 children and young people.

The support will also fund seven projects to help 1,780 children and young people with counselling and group therapy, while 40 parents and carers will also benefit. Elsewhere, 100 young men with mental health issues will benefit from a project offering weekly talking group sessions.

During almost two years of the pandemic, Freemasons have donated millions of pounds to support people in need. They have donated many tonnes of food, tablets for hospitals, ambulances and PPE, as well as supporting carers, women’s refuges, care homes, hospitals, hospices and funds for NHS workers.  In 2020, the Freemasons total charitable donations topped £51 million.

In addition, Freemasons also worked 18 million hours as volunteers in a range of different areas where there was a need, including driving vulnerable people to hospital, preparing meals, taking care of people at risk, organising care packages, as well as producing scrubs, PPE and hand sanitiser.

Dr David Staples, chief executive of the UGLE, said: “The pandemic has been devastating and mental health is a very important topic to us and our members. During the pandemic, thousands of Freemasons supported people in their communities, preventing mental health problems and supporting many families. This issue must be one of our priorities and we are joining forces to keep the population safe and feeling well.

“The UGLE has carefully chosen the institutions we are supporting, focusing on those with important objectives to achieve in the areas of tackling racism, mental health issues, living with bipolar disorder and prevention of young suicide. We need to do everything we can to help as many people as possible.”

In addition to the £1m donated in 2020, the Freemasons have committed a further fund of £2.1m to support the ongoing Covid-19 crisis response. Of that £2.1m, £850,000 has been allocated to support homeless people through several charities with which UGLE partners, while £715,000 is earmarked to support adult, young and parent carers.