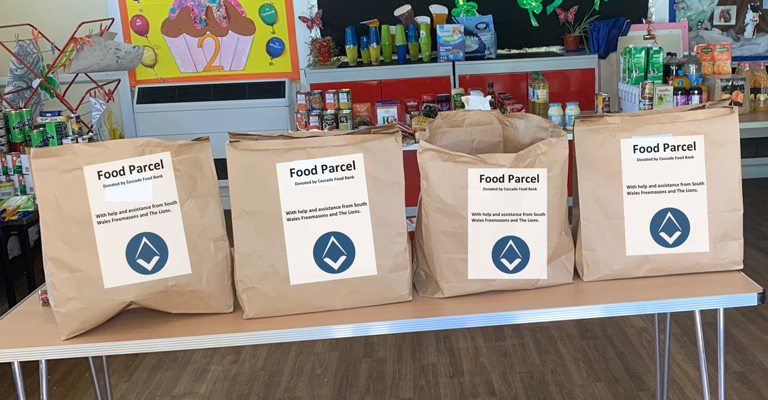 With many families struggling to put food on the table Freemasons across England and Wales are currently working on hundreds of initiatives to help minimise the daily pressure on households across the UK. [1]

During this difficult time, the United Grand Lodge of England, the governing body for Freemasonry in England and Wales, formed the COVID-19 Response Group to support those in need. The group identified food banks and people in vulnerable situations in need of help and set about galvanizing its network to provide food donations, deliveries, cooking fresh meals; as well as opening up local Lodges’ kitchens to cook meals.

Freemasons have been rolling up their sleeves and helping nationwide. In Bristol, 14 volunteer Freemasons are packing and labelling food parcels which are being delivered to those suffering food poverty. While in Bedfordshire, Freemasons provided 11 tonnes of food in May alone.

Elsewhere, food banks in North Cumbria, Windermere, Penrith and South Lakes are being supported with a £24,000 donation from Cumberland and Westmorland Freemasons. In addition, Worcestershire Freemasons helped six food banks and donated food and refreshment to NHS staff at the local Alexandra Hospital.

In Warwickshire, the Freemasons have donated £18,000 to the Fairshare Foodbank and Warwickshire foodbanks. While in Wiltshire, they are delivering to more than 30 homes and the list is growing every week.

While in Middlesex, they donated £41,000 and are providing meals 2,500 meals per week. According to their projections, Middlesex Freemasons will be providing more 45,000 meals to help vulnerable people.

In Norfolk, Somerset, South Wales, Berkshire, Cambridgeshire, Dorset, Durham, Hampshire and Isle of Wight, Staffordshire, East Lancashire, Leicestershire and Rutland, Northamptonshire and Huntingdonshire, Cornwall, Monmouthshire, Somerset, Lincolnshire, Herefordshire, Jersey and Sussex, local Freemasons are preparing meals and packages of food to be distributed to residents. In Sussex, for example, they have donated £28,000 to 14 foodbanks in the area.

Freemason Ezra McGowan – after suffering with the coronavirus himself – has been delivering food to those in isolation in West Lancashire, and has already donated more than two and a half tonnes of food.

Freemasons are also involved in another touching story. They received a call from David Matthews and his son Bailey looking for a place with a kitchen to cook Sunday lunches for more than 100 people. Freemason David Purdy supplied some catering equipment and the Devonshire Province immediately agreed to loan its facilities when its members heard it was to help vulnerable people.

Mr Matthews said: “I tried many places but the Freemasons were the only organisation to reply; I couldn’t do it if it wasn’t for their support. I now realise what a wonderful organisation it is and that its ethos is the same as mine. I’m sure when this current situation is over, and Lodges open again, I’ll definitely be applying to join.”

Devonshire Freemasons have also donated £15,000 to enable them to continue this work, in addition to donating five tonnes of food for Foodbanks, which adds up to 12,000 meals. While in Cheshire they have distributed more than 400 food parcels to the local community and Freemason Richard Pitt is preparing 80 portions of Fish and Chips every Friday and donating to frontline workers and the homeless.

London Freemasons have helped 40,000 people with 55,000 meals. While in Shropshire, they have donated £47,000 to help the community and to buy a van for the Shrewsbury Food Hub. In Buckinghamshire, Freemasons are providing 350 meals per week to Aylesbury Women’s Aid refuge, which houses 60 women, their children and others in vulnerable situations. In Somerset, local Freemasons have donated more than 20,000 meals.

In North Wales, Freemasons are cooking approx. 700 meals every Sunday and distributing them in Bangor and Anglesey and received a heartfelt message from local resident. Pete Williams said, “Many thanks to the Freemasons for including my 95-year-old grandmother in this very generous endeavour and delivering to her door. She was truly grateful.”

In East and West Kent meanwhile, Freemasons donated £65,000 to buy 3.6 tonnes of food and support the community. The Family Food Bank and many other food banks, are now able to supply in excess of 80,000 meals. In addition, they are helping Bexley Food Bank, Swanley Food Bank, Bromley Borough Food Bank and Nourish Community Food Bank.

Freemasons are also supporting the NHS. In Yorkshire, each week they are preparing and delivering 80 ready-packed meals (20kg), to the late-shift emergency services at Dewsbury’s hospital. They are also delivering 300 meals to local elderly housing every week. Since March, Derbyshire Freemasons have provided more than 1,000 meals at masonic centre kitchens, with 30 Freemason volunteers ensuring that they receive freshly prepared and tasty meals. In addition, Nottinghamshire Freemasons are helping 1,000 families each week.

In Surrey they are delivering frozen meals for distribution to families in need. Sarah Abellan from Nutfield Parish Council said: “Thank you for your generosity in providing frozen meals which are delivered to people in need. It has made a huge difference too many families.” In addition, Northumberland Freemasons cooked 800 meals in the Masonic Halls to run “Meals on Wheels”, and delivered freshly food to the emergency services, self-isolating people and care homes.

Dr David Staples, the chief executive of the United Grand Lodge of England, said: “No one, in this day and age, should have to worry where there next meal is coming from. With foodbanks across the UK being used more than ever before the crisis has put untold pressure on this vital network.

“We are so glad that we are able to provide thousands of families across the UK with a hot meal or food donations to get them through this current crisis. Freemasons have achieved all of this in just a few months and have also given their time to produce and deliver food to the vulnerable. We will continue to raise money and donate our time until we are able to return to normality.”

“Freemasons stand behind our core values of Friendship, Integrity, Charity and Respect and are proud to help so many in their time of need.”

[1] The Food Foundation (FF) report has found that 5.1 million people have experienced food insecurity during the lockdown.