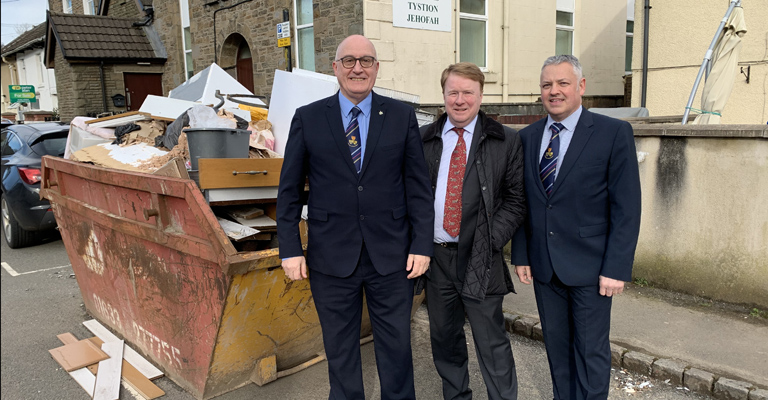 Local Freemasons in South Wales have donated £30,000 to help many people who have been badly affected by the recent flooding.

Hundreds of residents had their homes damaged by floodwater, with many faced with a wait of months before they can move back in. There has also been considerable damage to businesses and infrastructure.

Storm Dennis brought a month’s worth of rain in 48 hours to parts of Wales already badly affected by floods. Police declared a major incident as flooding and landslides caused chaos across the region. Hundreds of homes and businesses have been badly damaged with more than 20,000 properties across the region suffering power cuts during the storm. Freemasons are being asked to assist anyone in distress caused by the floods.

South Wales Freemasons will be making direct contact with as many of those individuals, organisations and local businesses who have been directly affected by the flooding so that help can be provided as efficiently as possible.

Any home or business owner who wishes to approach South Wales Freemasons to access a flood relief grant should contact Phil Bevan or Robert Payne at the South Wales Provincial Office 029 2043 3688 or almoner@nullprovince.org.uk

The £30,000 grant from South Wales Freemasons is jointly financed by the Masonic Charitable Foundation, which is funded by Freemasons, their families and friends, from across England and Wales.

Gareth Jones, Head of South Wales Freemasons, said: “To see the devastation caused by the flooding is heart-breaking. However, I’m pleased that Freemasons have been able to move so quickly to help those who’ve been so badly affected. My thoughts are with everyone who has to deal with the deeply depressing task of clearing up damage to homes and businesses”.