Home » News and Events » A rare ceremony to dedicate the banner of the Music Lodge No. 9919 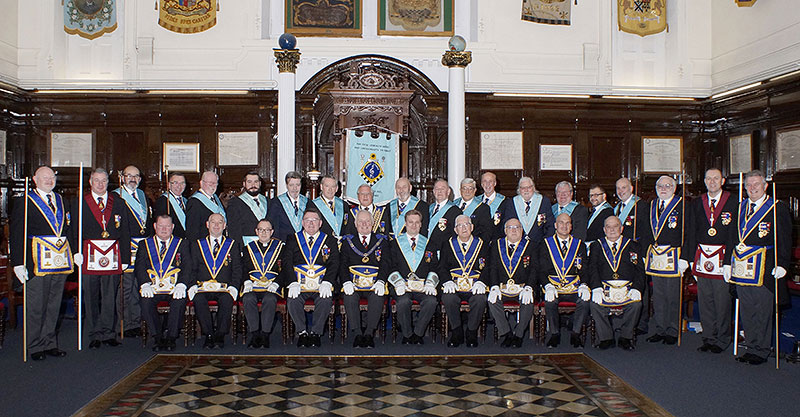 There was a full house at Cardiff Masonic Hall on Saturday 1 February 2020 to witness a rare ceremony to dedicate the lodge banner of Music Lodge No. 9919.

Banner dedication ceremonies are a rare occurrence in the Masonic Province of South Wales, and in fact, any Province under the United Grand Lodge of England. The last in South Wales was for Llangynwyd Lodge No. 8854 in Maesteg, in December 2017.

A dedication ceremony full of music

During the ceremony, the Music Lodge banner was paraded around the Lodge by the Worshipful Master, W. Bro. Dr Gavin Davies, whilst the Brethren sang the hymn, Now thank we all our God, accompanied in the organ loft by the Provincial Grand Organist, W. Bro. Chris Pike. The banner was presented to the Dedicating Officer for dedication.

Roger Richmond gave an oration on the historical significance of banners, their place as an original means of communication – dating back as far as Egyptian times – and tracing their uses right up to modern day. The connection of banners to their use within Royal Arch masonry was also made, and in a slight departure from the traditional ceremony the Brethren sang, in four-part harmony, the Welsh hymn I bob un sydd ffyddlon (the music entitled Rachie by Caradog Roberts and words by Henry Lloyd). The Music Lodge banner was then dedicated with the Provincial Grand Chaplain, W. Bro. Rev. Edward F. Dowland-Owen, offering the dedicating prayer. The brethren sang the second hymn will O God, our help in ages past and the Rev. Edward F. Dowland-Owen gave the patriarchal benediction. 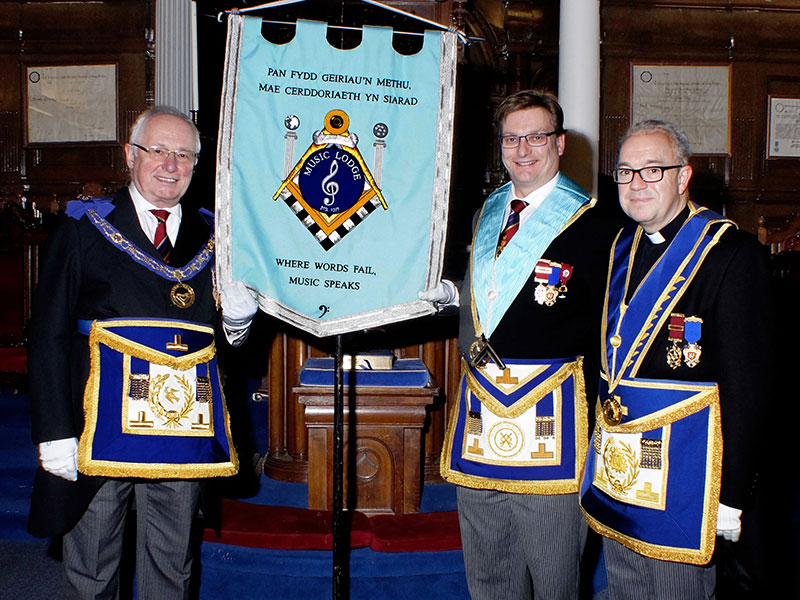 The Music Lodge and its ethos

The Music Lodge was consecrated on Saturday 5 March 2016 by the Provincial Grand Master, R. W. Bro. Gareth Jones OBE and a full team of Provincial Grand Lodge Officers. Originally, the Lodge was the brainchild of the late APGM W. Bro. Rev. Alistair Swinford and the Primus Master, W. Bro. Richard Thomas, who wanted to form a Lodge of comprising practicing professional musicians and Brethren who simply enjoyed music of all genres.

At the consecration over 175 Brethren were present in the Duke of Connaught temple in Cardiff Masonic Hall. Adding to the occasion, Sky TV was also present to film the event for a programme commissioned by UGLE. Cameras were allowed to film those assembling before the event and processing into the temple. The TV crew were also at the festive board later, and the material was used for the programme. 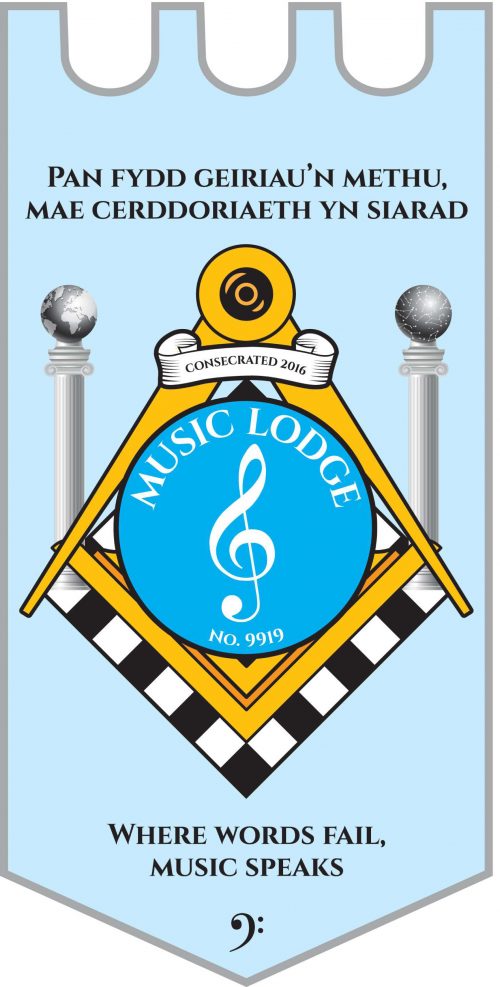 The banner design is on a light blue background, the appropriate colour of Craft Masonry, edged with silver.

The central aspect of the banner depicts the ‘badge’ of the Music Lodge – a logo originally designed by the daughter of the current Lodge Almoner, W. Bro. Roger Duffy – comprising the lodge name, number (Music Lodge No. 9919) and a symbol of a treble clef – a recognised symbol of musical notation.

The logo sits in front of the square and compasses and chequered pavement, both symbols of Freemasonry. The consecration date is shown in a smaller font within a scroll motif above the logo and centred on the compasses. The whole design is flanked by two pillars in grey with the terrestrial and celestial bodies atop each, again in grey. Again, these are symbols of Freemasonry.

Headline text, in black and font size smaller than the Lodge name font size, states: “Pan Fydd Geiriau’n Methu, Mae Cerddoriaeth Yn Siarad”. This is a Welsh translation of the motto of the Lodge: “Where Words Fail, Music Speaks”, a quotation by Hans Christian Andersen. This text is depicted at the bottom of the banner, and underneath this a bass clef – another recognised musical symbol significant to the Lodge ‘theme’. All the colours used for the banner are the colours found in Freemasons regalia, which represent the warmth of brotherhood and charity. The inclusion of a bass clef at the bottom of the banner was the idea of the Worshipful Master, W. Bro. Dr Gavin Davies. He thought that the bass clef must appear with the treble clef to give musical balance. The brethren of the Music Lodge all played a part in designing the banner, and the banner was generously gifted to the Lodge by W. Bro. George C. Royle. 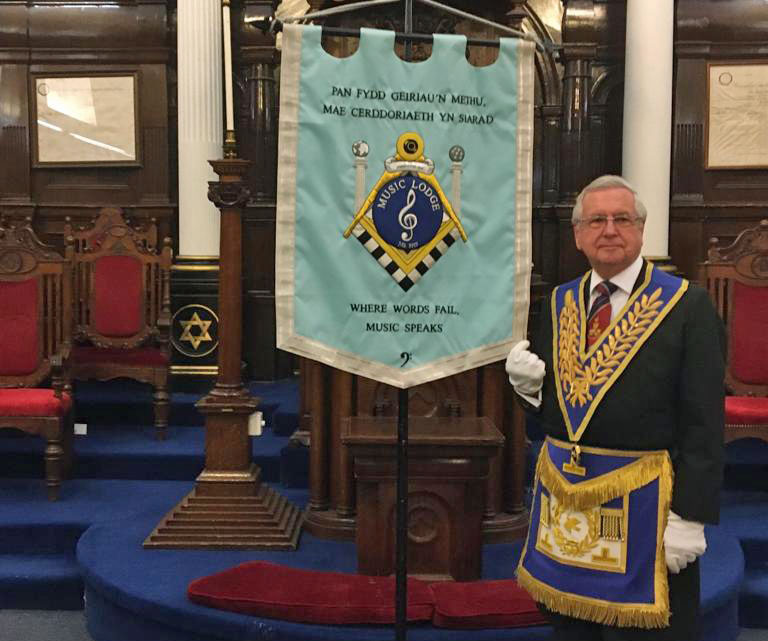 A musical festive board

True-to-form for the Music Lodge, the festive board, which followed this banner dedication ceremony was a fully musical affair, led by the Worshipful Master. It was attended by Brethren from neighbouring provinces, which included the Deputy Provincial Grand Master from the Province of Bristol, himself a keen amateur musician.