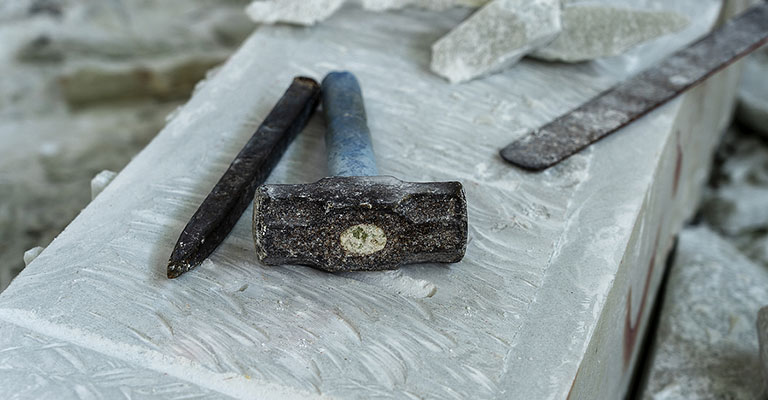 The Entered Apprentice is only introduced to the three protagonists in this story in the explanation of the First Degree tracing board, an explanation which is often dropped from the initiation ceremony and delivered at a later date.

The temple and palace itself took a further 13 years to complete.  As well as the stonework, which would have been carried out by Hiram’s skilled craftsmen, Hiram Abiff used cedar sent into Joppa on the Mediterranean coast by King Hiram in the form of rafts.

Our masonic tradition tells us that the stonemasons would have identified their work by engraving a mark or symbol unique to them into the stone block so they could be rewarded for their work.  The system of rewarding the workmen according to the skills and knowledge they had attained, and the requirement for them to communicate that they possessed that knowledge without giving away any secrets to less experienced workers, forms the basis for much of the allegory of the second degree.

The marking of your work, the reward gained, the temptation for some to fraudulently attempt to claim the higher wages of a Mark Master Mason and the penalty that would attract are the central elements of the two degrees in Mark Masonry, sometimes referred to as an extension to the second degree.

The Fellowcraft is tought the lesson of making the most of life and applying himself to the task at hand using the essential tools of an expert craftsman: the square, the level and the plumb-rule.  The Second Degree tracing board also goes into great detail about some of the design and adornments of the temple, including the two pillars situated at its entrance.

From this and similar descriptions in the Torah, the Books of Jeremiah and 1 Kings, it is thought that the temple followed a Phoenician design in the langbau style, i.e. divided into three parts, the porchway or entrance, the sanctuary and the Holy of Holies.

We don’t know if the porchway was enclosed or an open courtyward, and so the pillars could have been built into the porch or, more likely, freestanding.  We do know they would have been made of bronze (or possibly copper or brass) and, of course, that they were named Boaz and Jachin.

We have already met the former – the son of Rahab and Salmon, one of Joshua’s spies – at Jericho.  He became a wealthy landowner in Bethlehem in Judea, married Ruth and has a son, Obed, who had a son Jesse, father of King David.

The origin of the name for the latter is less clear.  The Fellowcraft Freemason is told it refers to an assistant high priest who officiated at the dedication of the temple.  So the obvious questions here are why did an assistant high priest officiate at a ceremony as momentous as the dedication of the temple, and why was one of the pillars named after him?

Well, in short, thanks to some confusion when writing our current ceremonies in the 18th century – confusion that litters the origins of our ritual and traditions – he didn’t and it wasn’t.  There was indeed a member of the order of priests established by King David called Jachin, but the dedication of the temple was not overseen by him.  Nor, in fact, was it even overseen by the High Priest, Zadok.  Solomon himself presided, but our no-doubt well-meaning ritual writer assumed that the honour of having a pillar named after him must have meant this Jachin was much more important than first thought!

In fact, Solomon had already decided on the names for the two pillars.  Boaz was, indeed, in honour of his ancestor, but Jachin was a compound word “Ja-kun” meaning “God has established”.  So another masonic mystery is solved.

Next month the temple nears completion and we encounter events that no Master Mason will ever be able to forget.