Home » Orator's Blog » A Freemason’s History of Jerusalem – Islam, the Crusades and the Present Day 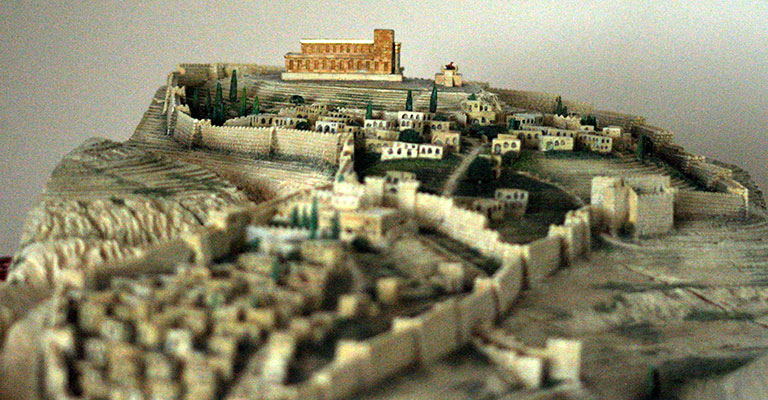 Last month we read about the conversion of Constantine in 306 AD and the Christian masonic orders based on those events.

Soon afterwards, the huge and ambitious Roman Christian Empire succumbed to the classic mistake of spreading itself too thinly, leaving Jerusalem vulnerable to conquests.  Indeed, the early 7th century saw the city change hands between Persians, Jews and Byzantine Christians.

Around the same time, Muhammad and his followers established Islam’s first Mosque in the city of Medina in modern-day Saudi Arabia.  Eventually, a Jihad began, leading to more militant action and forced conversions throughout the Arab world.  Muhammad died before reaching Jerusalem, but his successor, Omar, knew the value of the holy city to the ruling Byzantine Christians and negotiated the peaceful takeover of Jerusalem that granted the Christians access in exchange for their surrender.

The first Muslim dynasty brought an entirely new sense of freedom to Jerusalem.  Jews were once again allowed to pray on the Temple Mount and the early Muslim leader, Abd al-Malik, brought a sense of unity to the two Muslim sects by building the Dome of the Rock on the site of the Second Jewish Temple in 692 AD, as well as the al-Aqsa Mosque, also on Temple Mount.

But any sense of peace in Jerusalem would come to a bloody end at the hands of Crusaders.  The First Crusade was a violent campaign called by Pope Urban II in 1095.  He wanted to liberate the Church of the Holy Sepulchre and effectively conscripted and armed Christian men across Western Europe.  Poorly trained, but singularly united, they marched on the Holy City, killing thousands of Jews or forcing them to convert.  Their Muslim opponents, in contrast, suffered from in-fighting and personal disputes between Arab and Turkish leaders, preventing them from working together.

In the summer of 1099, the Crusaders reached Jerusalem, scaled the city walls, opened the doors and massacred the trapped population.

However, the Crusaders’ legacy was to be more nuanced than that.

After the conquest of Jerusalem, a group of Crusaders formed a religious order to support a hospital established in the Christian Quarter of the city by merchants from Amalfi, dedicated to John the Baptist, to provide care for the sick, poor or injured pilgrims.  Headquartered in Jerusalem, the organisation became a military religious order under its own papal charter and became known as the Order of Knights of the Hospital of Saint John of Jerusalem or the Knights Hospitaller.

Around the same time, the Knights Templar or Order of Solomon’s Temple was founded in 1118 AD by a small band of warrior monks to protect pilgrims heading for Jerusalem and the Christian Holy places.  King Baldwin II of Jerusalem, who had travelled with the First Crusade with his cousins, granted the Templars quarters on the Temple Mount.  Many men, of noble birth, joined the ranks of the Templar Order. Those who were unable to join often gifted the Templars with land and other valuables.

Modern Masonic association with these medieval defenders of the Christian Holy places is linked by the ceremony of Installation in which the Candidate takes the part of a Pilgrim who, by symbolically embarking on a Crusade, is elevated to Knighthood.  Knights are then eligible as Candidates for the Malta Degree.  While the regalia and ceremony are very different from that of Knights Templar Freemasonry it is not a sovereign body, rather a progressive degree within the Order of the Knights Templar.

Muslim rebellion led to future crusades and a continual battle over Jerusalem; the city changing hands over and over again with Muslims defeating Crusader armies, the Christians regaining access to the Church of the Holy Sepulchre, Jews being left out entirely, Muslims mourning the loss of their city, Christians longing for the Temple Mount itself, invasion by sabre-rattling Tatar horsemen, the introduction of a caste system and, in the early 13th century, the decimation of the once-great city.  The Mamluk slave-soldiers rebuilt the city with adornments and restorations that can still be seen today.

After the Mamluks, Jerusalem was taken over by the Ottomans and the city grew.  By the turn of the twentieth century, hopes for Jewish and Arab independence flourished, but after World War I, several international treaties increased tensions in the city, filling the following decades with escalating violence and increased extremism.  Escalating violence led to the Battle of Jerusalem in 1948 and an angered President Nasser of Egypt spurred on a brief conflict that secured a decisive victory for Israel in 1967.

So what have we learned?

The city of Jerusalem has a complicated relationship with masonic storytelling.  Some of the progressive orders attribute their origins to actual events in its history.  However, the Craft’s adoption of the story of the building of King Solomon’s temple as its allegory is a relatively recent, 18th century development.

Nevertheless, the Holy City is incredibly significant to the three Abrahamic religions and human history in general; and the dramatic events that played out there over the centuries provided a rich lexicon for our masonic forefathers to write the stories of morality, integrity, brotherly love, devotion to duty, tragedy and redemption with which we are so familiar today.

Understanding the history of those actual events, far from spoiling the magic, enriches those stories with colour and texture and helps Freemasons appreciate even more the tenets and principles of our timeless society.

You can get the full version of A Freemason’s History of Jerusalem by emailing the author at orator@nullsouthwales.com.