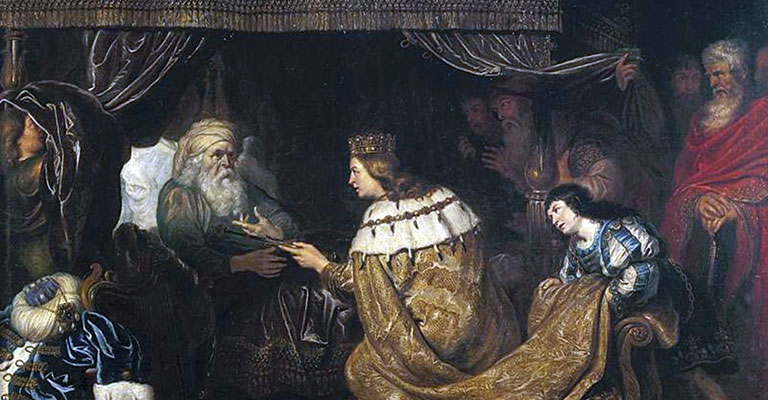 Although a great warrior himself and a servant of King Saul, David provoked great jealousy in the King, who plotted his elimination.  David had, however, become great (and lifelong) friends with Saul’s son, Jonathan.  When Jonathan told his friend of his father’s plans, David fled to the hills but was kept informed of developments by Jonathan using a special form of communication.

A third war against the Philistines led to a battle at Mount Gilboa, during which Saul and his son Jonathan were killed, clearing the way for David to become King.

David and Jonathan’s loyalty right to the very end, and the special system of communication they developed, form the story of the Order of the Secret Monitor.

Interestingly, there is very little historical evidence about David besides the biblical accounts in the Books of Samuel, Chronicles and Psalms.  Some historians even doubted his existence but in 1993 an ancient inscription – the Tel Dan Stele – providing historical verification of his life was found in northern Israel.

We do know that around 1000 BCE, David conquered Jerusalem, which at this time was still quite small, especially compared to the neighbouring city of Babylon, and the twelve tribes and the Ark settled just outside the old town.  The settlement became known as the City of David and David started plans for a new Tabernacle.  He would never see it finished though, apparently as a punishment from God for not being an entirely benevolent King himself.  On his death bed, after reigning for some 40 years, David appointed his illegitimate younger son as his successor.  His name was Solomon.

King Solomon eventually started building the first temple at Jerusalem in the fourth year of his reign, around 900 BCE, inside the city.  While the exact location is unknown, it is generally believed it was situated on the hill now known as Temple Mount, the present-day home of the Dome of the Rock.

It is the building of this inaugural version of the Temple at Jerusalem that provides the setting and lexicon for the vast majority of the allegory used in ‘Craft’ Freemasonry.  However, this ‘Solomonic’ context for Freemasonry’s tenets, symbolism and ritual was only introduced to Freemasonry in the early 18th century.  Before that, we know from the Graham Manuscript that in 1726 the Craft was using the legend of Noah and his three sons, Shem, Ham and Japeth – characters very familiar to any Royal Ark Mariner.  But, during the 1730s, first ‘Masonry Dissected’ and later Dr James Andersen’s 1738 Constitutions itself start – first in addition to, and later instead – to refer to King Solomon and the building of his temple.

Solomon called on a friend and former ally of his father, King Hiram I of Tyre to help him with the construction of the temple by supplying cedar and cypress timber, in return for wheat and oil.  To oversee the build, Solomon secures the services of another man called Hiram, also from Tyre.  His full name was Hiram-Abi or Hiram Abiff.

The stone was cut by Stonemasons from Gebal, the Hebrew name for the then-Phoenician city of Byblos, situated in what is now Lebanon.  The foundations took around seven years to lay and provide the Entered Apprentice in the first-degree ceremony with an analogy for the building of something new.  The working tools with which he is presented are for him to chisel the stone, rough and unhewn, from the quarry for the further improvement of more experienced craftsmen.

The building of the temple is underway.  Next month we shall see its completion and explore the momentous events leading up to it.