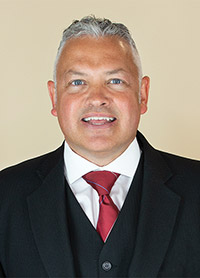 In the Craft, E.Comp Rob was Initiated into Freemasonry in Emerald Lodge No. 5907, Cardiff on 28th February 2006, by his Father W.Bro. Geoffrey Payne, making him the third consecutive generation to join the Fraternity, after his Grandfather. W.Bro. Captain Pierre Payne, MBE; who was Initiated into Emerald Lodge, on the 27th April 1949.

Earlier this year, E.Comp Rob was Appointed to PAGStB in United Grand Lodge and also received a commendation from the Most Worshipful Grand Master, for his outstanding contribution to Freemasonry’s role in our Nations fight against Covid-19.

E.Comp Robert proudly served as a Trustee of the Masonic Benevolent Fund of South Wales from 2015 until 2019. In 2019 he was also invited to serve on the Charity Stewards’ Advisory Group and was also appointed as Masonic Charitable Foundation Representative for the South Wales Province. In 2020 he was invited to work with Regional Communications Group 4 to oversee the Freemasons Covid-19 community fund grants.

Rob was elevated in the Ancient and Honourable Fraternity of Royal Ark Mariners in the St. John’s Lodge No. 28 on 17th April 2013, serving all the progressive offices and was Elected to be Commander in 2019 (due to be Installed in April 2020, but) due to Covid-19 this has been delayed until November 2021.