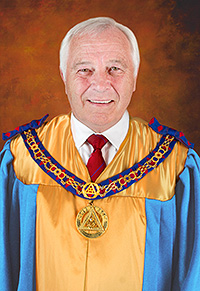 “Who Are You” is the title track on The Who’s 1978 album, Who Are You, the last album released by the group before Keith Moon’s death in September that year. Later released as a double-A sided single and was chosen as the theme music to the American TV programme CSI: Crime Scene Investigation, episodes are still being shown today!

Here goes: Craft and Other Orders
I was initiated into Penllergaer Lodge No. 5567 on the 8thApril 1997 and was installed as Master in February 2004. I was appointed Lodge Secretary in 2007 and held the Office until 2017.
In June 2010 I was appointed Provincial Grand Steward, without doubt, the best first Craft appointment for any Worshipful Brother. A most rewarding experience with duties spanning 4 years, and now Stewards wear a different provincial tie which is very much envied. Following further promotion to PPrSGD and PPrJGW I was honoured to be appointed Past Assistant Grand Director of Ceremonies in Grand Lodge April 2018 – a truly magical experience.

I was advanced in Talbot Mark Lodge No.179 in 2001 and Master in 2014. Appointed Assistant Provincial Grand Director of Ceremonies in 2017 and promoted to PPrGSwdB 2020. Initiated in Abertawe Lodge Royal Arc Mariners No.179 2002, installed as Lodge Commander 2013 and appointed to Provincial Grand Rank 2019. A joining member of the South Wales Installed Mark Masters Lodge N0.1201 and the South Wales Installed Commanders Lodge No.1201.

I became a member of the Allied Masonic Degrees Gower Council No. 76 in 2008 and was Master 2013. Appointed District Grand Steward in 2014, District Inner Guard 2015 and promoted to Past District Grand Sword Bearer 2016.

I was perfected in the Ancient and Accepted Rite Rose Croix of H.R.D.M. Morganwg Chapter No.70 in 2008 and the Covid Pandemic prevented me, like so many others, from progressing to Most Wise Sovereign, ah! well let us hope for next year!

In June 2014 I was appointed Secretary of the Provincial Grand Lodge of South Wales 2021 Festival in aid of the Royal Benevolent Institution Care Co.

I have great pleasure and enjoyment from, not only being a member of each of these but importantly taking an active part, that is what makes it so satisfying.

Well, that is enough about my career in the Craft and other Orders.

I was exalted in Talbot Chapter No.1323 in 1998 and still remember, upon being restored to light, being greeted by a beautiful awe-inspiring sight, symbolically and spiritually. The Exaltation is a wonderful story and once the Exaltee has understood and grasped its meaning it becomes so easy to comprehend it is the completion of the Third Degree. It is so colourful, something never to forget.
In May 2009 I was invested as First Principal and was the Chapter Director of Ceremonies for several years.

I am a joining member of Penllergaer Chapter no.5567 in 1999 and First Principal in May 2008 and was the Scribe E for several years

A joining member of Chapter of Progress No.7928 in 2011and the Director of Ceremonies for several years.

A joining member of Meridian Chapter No.9603 in 2014 and is currently First Principal. Again, the Covid Pandemic played its part by preventing me installing my successor in October this year.
I am also a joining member of Hendre Chapter in 2017.

I was appointed Assistant Provincial Grand Director of Ceremonies in 2011 and Deputy Provincial Grand Director of Ceremonies in 2013, which I held for four years. Both these offices were absolutely delightful where, although I thought I had a good grasp and understanding of Royal Arch Chapter, I continued my education and understanding of this wonderful Order.

In June 2020 I should have been invested as Third Provincial Grand Principal and again the dreaded Covid Pandemic thwarted my and E.Comp. Peter Jones’s progression. However, relaxation in the Welsh Assembly rules allowed 15 Companions to meet at Hendre Chapter on Friday 27th of November. E. Comp. Arthur Salter was installed as First Principal, E.Comp Hugh Thomas as Second Principal and the ME Third Grand Principal E.Comp Gareth Jones as Third Principal. The ceremony was exceptional, then followed what can only be described as “the icing on the cake” when E.Comp. Peter Jones and I were invest as Second and Third Provincial Grand Principals respectively, a magnificent ceremony indeed!

I have always enjoyed all my masonry and relish taking an active part in the ceremonies. Indeed, I have some party pieces such as, the First-Degree Tracing Board and the role of Principal Sojourner for the Exaltation Ceremony. I have also delivered all three explanations of the Robes buy have now homed in on the Red Robe. I have great pleasure in attending Chapter meetings and never tire of the ceremonies.

If you are wondering what the R is in my name it is Richard. I think it is purely a Welsh thing where all to often the first name is not used, I think it is because the father has the same name, well mine did but he used his second name too. Lastly, I was born in Swansea in a little village called Pentre Estyll and now live in Mumbles part of Gods little Acre Gower.