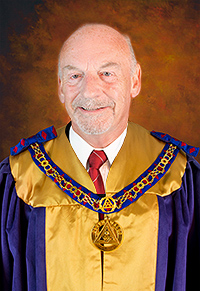 Initiated into the Harlequins Lodge 5793 on the 13th February 1984 with younger brother – one of the best days of my life! Being an Old Boy of Cardiff High School for Boys, it was the obvious choice as it was that school’s lodge. He and I progressed through the offices and I became WM in 1992 and installed “little bro” into the chair the year after. It was the same in Chapter where we were exalted into Llanfair Chapter 7353 together on 11th November 1988, progressed through the offices and became First Principal in 1997. Again I installed the now Most Excellent 3rd Grand Principal into the chairs of Joshua, Haggai and Zerubbabel in the years following me. That, as you can imagine, was the last time I was slightly more senior in masonry than him. I am, of course, extremely proud of him and his achievements.

In the Craft I was lucky to subsequently be promoted to acting rank in the Province as Assistant DC in 1998, Deputy DC in 2000 and Provincial Grand Warden in 2009. Became Provincial Grand Director of Ceremonies 2014 until 2019 when I was appointed in Royal Arch to 3rd Grand Principal.

In Grand Lodge I was appointed PAGDC in 2011 and promoted this year to PJGD.

In Supreme Grand Chapter I was appointed as an acting Grand Standard Bearer in 2018 and was lucky to travel parts of Britain to act as Director of Ceremonies for some of the Rulers on their visits to various Provinces. One of the highlights was acting as Grand DC for the ME 2nd Grand Principal in the Grand Temple Great Queen Street on his visit to the Provincial Grand Chapter of Surrey. To stand at those great doors and call Companions to Order is something which will stick in the mind for ever.

I am a subscribing member of five Chapters in the Province and honorary member of one other.

In the Mark and Royal Ark Mariners matters were reversed and my brother installed me in the chairs of both. Having attained the chairs, I now have senior Provincial Rank in both and whenever my diary allows enjoy visiting all the lodges to which I belong as well as my Rose Croix Chapter.

Out of Free Masonry, I live with my partner Amy, have two sons and two grandsons.

I have always been involved and played numerous sports including rugby, cricket, tennis, squash and badminton. A back injury playing rugby at university meant I eventually had to give up that sport and resulted in three back operations in 1972, 1994 and 2016 but I managed to keep playing the other sports for some time until I eventually hung up my badminton racquet in 2018 at the age of 70.

For the last 20 years I, with my partner and friends, have been keen hill walkers. At least one weekend a month you will find me up a mountain in the Beacons, Black Mountains or local hills in Monmouthshire; and once or twice a year in Mid-Wales, Snowdonia, the Lake District, Yorkshire Dales or Scotland.

Every few years we try to go further afield and have hiked “hut to hut” in the Picos Europa, Picos Alto and in September 2014 we made it as far as Everest Base Camp taking 14 days to get up and down. Five months later the earthquake hit that area and many died at base camp. We were glad we had chosen September as our next choice was February/March!

I, like everyone, am waiting for this terrible time to finish and for normality to return so we can get back to the fraternity we all love. Amy for one is keen for me to get out again in the evenings so she can catch up on “Strictly” without me complaining all the time.

I cannot wait to fulfil my role as 2nd Provincial Grand Principal and visit as many of the Chapters in the Province to enjoy the camaraderie of all the Companions.