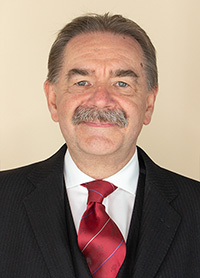 My twin sister and I were born in the Gower and brought up in a Welsh speaking home not far from Ravenhill Park in Swansea. Having attended the local Junior school (not a Welsh medium school) followed by Dynevor Grammar School I left for Cardiff and some years later started a teaching career there, although,initially I was on my way to London. Home life was centred round the local chapel, Sport, Music and Welsh culture. I was fortunate to be surrounded by good role models who were proficient in these aspects of our life.

My interest in Freemasonry emanated from being a “Lewis”. My late father, W. Bro. Gwilym Initiated, Passed and Raised me in Indefatigable Lodge No. 237 during his tenure as its Bi-Centennial Master. These initial ceremonies are events that will remain in my Masonic memories and experiences for many years. Another close family member, the late Bro. David Brynmor Anthony (a past Treasurer of W. Glam Lodge) presented me with his Regalia for my Initiation that I treasure to this day along with his Holy Royal Arch Regalia and Jewel. Some years later, I had the pleasure of providing that same regalia for my brother-in-law on the occasion of his Initiation and Exaltation.

Due to work and contractual obligations I was not able to attend Lodge meetings as I would have liked. The first 10 + years of my career involved working with pupils and organisations in the County Music Service, working part-time in live-theatre along with sport and community based projects. I also pursued my own musical interest via the organ and choral groups. Regrettably, this was curtailed after an accident to my arm and surgery to restore use of my hand. Again, my gratitude to a skilled orthopaedic surgeon at that time is unparalleled.

My Masonic career evolved when I transferred to Prince Llewellyn Lodge No. 2570 in Cardiff. I was able to serve the Lodge in each Office following acting as Organist for a few years and eventually becoming WM in 1997. Membership of other Masonic Degrees ensued as my journey in the fraternity enabled me to meet with Brethren who were engaging, learned and good Masonic role-models. Over a number of years, I have also had the privilege of being given opportunities to assist a variety of Masonic orders with their Music. It has certainly been a rewarding experience to support them at domestic and Provincial Musical events where members and their families enjoyed conviviality and socialability in their desire to help a variety of charitable causes. I also served as WM of Prince Llewellyn as Charity Steward from 2003 through to the2010 Festival and becoming WM again in 2005-2006. I was promoted in Provincial Grand Lodge to PPrGReg in 2011 and to PPrGJW in 2020.

Other Orders that I hold membership include The Antient and Accepted Rite, Mark Master Masons and Royal Ark Mariners and, of course, The Holy Royal Arch. I was Exalted in Edgar Rutter Chapter in February 1998. I have been fortunate to have been its First Principal on three occasions and also served as Treasurer and initially as organist. Currently, I am the Scribe E of the Chapter. In May 2005 I became a Joining member of Hendre Chapter No. 3250 becoming Assistant Scribe E in 2012. I have also served as First Principal of Proscenium Chapter 2011-2012 having been a Founder in May 2006. I have also occupied the Chair as MWS of the Universities RC chapter No. 1012 in 2002-2003 and in 2005 became a Founder of The Richard William Dicker Chapter No. 1172 of which I am currently the MWS–Elect.

My first active Provincial role in Craft Masonry was that of PJGD in 2003 followed by Provincial Grand Steward in the HRA in 2008. After this I became a PPrGSoJ in 2011 and Provincial Grand Organist in 2012 until 2019 following in the steps of some eminent Companion Organists. Much to my surprise I was invited to accept the offer to become an Officer of SGC with the rank of PGStB in April 2018 – an honour and experience that is unforgettable. However, my appointment to my present office as Assistant to the Provincial Grand Principals has been a development that I never envisaged. I assure the Most Excellent Grand Superintendent and you fellow Companions that I will apply myself and serve the Province to the best of my ability. I will also continue to seek advice where and when required as we endeavour to foster those tenets and principles that draw us to helping and learning from one another.

During my time in Freemasonry I have been fortunate to have been afforded Honorary membership of a number of Lodges and Chapters. In so doing, I will always do my utmost to attend and support whenever possible.

My initial Advancement in Mark Master Masonry and Royal Ark Mariners took place in the Province of Monmouthshire at Albert Edward Mark Lodge No. 1317. I have also had the privilege of being a ‘Founder Member’ of Dewi Sant Mark Master Masons No. 1914in 2010. This has been a unique experience whereby meetings are conducted through the Welsh language. My initial office was that of Senior Deacon and becameWM in March 2015-2016. Since that time I have also had the honour of being appointed Provincial Grand Organist in 2017 and recently promoted to PPrSGO.Likewise in July 2015 I became a Founder of the Albert Edward Prince of Wales Lodge of Research No. 9908.Also in the Craft I joined Dewi Sant Lodge No. 9067 in 2004 and became its WM in April 2017-2018 and again 2018-2019. The Lodge was honoured to receive a dispensation to conduct its ceremonies and business through the medium of Welsh making it unique in the Constitution of the United Grand Lodge of England and held that inaugural Welsh meeting in October 2019. In January 2008 I became a joining member of Hendre Lodge No. 3250 and appointed Organist on several occasions and later as a Lodge Mentor. I joined the City of Cardiff Lodge No, 7528 in January 2009 where I hadclose friendships over a number of years and subsequently serve as Organist.

I am married to Meinir whose encouragement and support have been immeasurable. As a result, my Masonic activities have been enhanced with her alongside me particularly at social and at Festive Board arrangements in the various degrees. Both Meinir and I have interests in walking, swimming, the theatre, concerts, travel and gardening. We have also had interests in Charitable organisations such as Cancer Research Wales and Noah’s Ark.

I consider myself to have been extremely fortunate to have become involved with The Holy Royal Arch. Within the spectrum of Freemasonry I have met men who have become Brethren and developed their Masonic interest to become a Companion. The aura of ‘Companionship’ is palpable and invariably effuses an enthusiasm to learn more of the fraternity and its origins. Within its ‘vaults’ there exists a labyrinth of knowledge to be discovered and shared that can enable Companions to further develop their Masonic career. Such knowledge awaits those who are desirous of increasing their understanding and significance of the tenets and principles that shape our Order and encourage future generations to embrace Freemasonry.

When these days of uncertainty and tribulation pass, I look forward to meeting again Companions I know, and those that I have yet to meet.