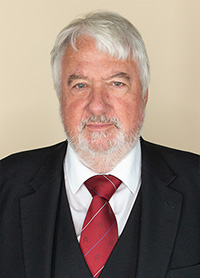 John has always considered himself a Porthcawl boy, though he was actually born in Wembley, Middlesex. However, he only spent the first few months of his life there, as his parents (both from the Swansea Valley) moved to Porthcawl from London with his father’s job in the Steel industry.

John was educated at New Road School, Porthcawl, and later at Bridgend Boys’ Grammar School where he gained 3 Welsh Schoolboy International caps at Hockey. He left Bridgend with A levels in French, German and Economics to take up his studies at Loughborough University, gaining a degree in European Studies (French, German, Economics and Politics). From there he went on to do his PGCE at Cardiff University.

John retired early to join his wife, Helen, in her Marketing Consultancy business, and continued working there until Helen also retired in 2018.

John and Helen have been married for 39 years and, despite having retired, are still both very busy people.

Apart from his involvement in Freemasonry, John enjoys a game of snooker at Ye Pirates’ Club in Porthcawl, is a member of the Church choir, and, until lockdown, taught German at the Porthcawl branch of the U3A.

Helen, a Porthcawl girl, has run a local Brownie pack for many years, was President of Girlguiding Cymru from 2009 to 2018, and is a very active member of Soroptimist International. In addition, she also manages the parish website and edits the parish magazine

John was proposed into Freemasonry by the late W. Bro. David MacNeish, a family friend, and seconded by W. Bro. Brian Comley PJGD. That was in 1993, but due to a 5-year waiting list for Venables Llewelyn Lodge, John was not actually initiated until May 1998. He was Worshipful Master in 2009, has been the Lodge Charity Steward since 2011, and is also the Lodge Royal Arch Representative. He is also a member of Hendre Lodge. In Province he was appointed an Active Standard Bearer in 2015, and Active Senior Deacon in 2019. He also checks the summonses of all Craft Lodges for the Province.

He is a joint Area Liaison Officer for the friends of the Albert Edward Prince of Wales Court, and was Chairman of Porthcawl Masonic Hall’s Building and Catering Committee from 2010 to 2017.

John was exalted into Venables Llewelyn Royal Arch Chapter in February 2001 at the insistence of his proposer and seconder, W. Bros. David MacNeish and Brian Comley. “Their view was that I could join any progressive order I liked, but I had to complete my Third degree first. It was a move I have never regretted, and I have always been grateful for their advice and guidance.”

“Initially, my attendance at Chapter was rather sporadic due to clashes between ceremonies and Parents’ Evenings at school. However, when the dates of Parents’ Evenings were altered, I was able to attend regularly and, after a few years as Steward, was appointed Second Assistant Sojourner, and being able to get involved in the ceremony and the ritual really fired up my interest and enthusiasm. The intricacy of the ceremony and the beautiful language of the ritual, in particular, appeal to me as a lover of languages. As in all Masonry, though, it’s the people that really make it – their friendship, encouragement, support and advice really do make a huge difference.”

“The appointment of Provincial Grand Scribe Nehemiah came completely out of the blue. I was astonished and speechless, but also very honoured, privileged, and proud to be offered the position. It is naturally a regret that I have not been able to take up my duties due to the COVID 19 pandemic, but I very much hope  that Chapters and lodges will be able to meet once again in the near future so that I can visit as many Chapters as possible.”
E. Comp John Murdoch, ProvGSN