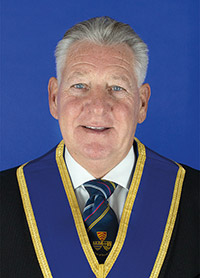 The role of the Provincial Grand Charity Steward is to oversee and promote all charitable giving within the Province.

W.Bro. Phillip Saunders has been a craft member for 32 years and was initiated into Cartref Lodge No 5772 in 1990. He was appointed Provincial Swordbearer in 2003 and was promoted to Provincial JGW in 2011. He was then promoted to PGStBr in United Grand Lodge in 2016.

Phillip says: “The role of Provincial Grand Charity Steward will be hugely rewarding but will also need a considerable amount of commitment and dedication, which I am happy to give. It will provide me with insight into the fantastic work already achieved by the lodges within our Province, coupled with the grants paid out from MCF and MBF. I aim to cement a friendly working relationship with all the Charity Stewards in our Province. I am encouraging them to not only raise money but also embrace and enjoy the office of Charity Stewards. I will promote the advantages of encouraging their members to sign up for a continual giving covenant within their Lodge, which has many benefits, including gift aid and interest paid on the money paid in, plus we will slowly be moving over to digital giving, so I will be there to advise with any help needed. I will also encourage them to support Charitable and Non-Masonic Charities, plus individuals who need assistance. I want to make the office of Charity Steward both interesting, rewarding, and fun.”

What are the responsibilities of the Provincial Grand Charity Steward?

A booklet entitled The Charity Steward’s Guide can be downloaded free of charge from the MCF website.

The Provincial Grand Charity Steward can be contacted by emailing
ProvGChStwd@nullprovince.org.uk
Twitter: @swales_charity